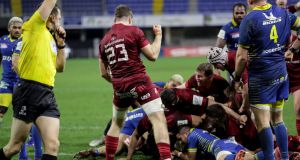 JJ Hanrahan provided the goal kicking heroics but this resounding victory at Stade Marcel-Michelin must be remembered for Peter O’Mahony’s supreme tutorial in the art of leadership.

“Outrageous,” yelled the Munster captain when Thibaud Lanen dragged Tadhg Beirne from the night sky after losing a crucial lineout near Clermont’s tryline.

“Move away Peter!” implored English referee Matthew Carley as O’Mahony defiantly stood on the precipice of open violence. “Peter, move away! Peter! Let me do my decision.”

O’Mahony refused to budge until Lanen was sin-binned.

“We came here to win,” said Munster head coach Johann van Graan. “We didn’t come to get a bonus point.”

This truth became self-evident when CJ Stander was powered over by the very next lineout maul and Hanrahan put them ahead, 32-31, for the first time with 10 minutes to play.

The secret to resisting ASM Clermont Auvergne in full flow is to hang on for dear life and kick every point on offer. Munster’s young and old – Josh Wycherley and O’Mahony in particular – refused to fade despite multiple moments when they would be forgiven for doing so.

Clermont and their Fijian forces of nature needed only 26 seconds to claim the first try of what promised to be a 40 or 50 point rout. The Munster goose appeared to be cooked when Damian Penaud glided over for a third try inside 15 minutes. It took 23 minutes for hooker Etienne Fourcade to barrel through Hanrahan for the bonus point.

The Munster outhalf was isolated because his pack was unable to cope. Or so it seemed. Stander, Beirne and O’Mahony were immense from start to finish but the other five forwards in red seemed out of their depth. In fact, they were just hanging in there, perhaps knowing the ultimate French opposition lacked their end game fitness.

To a man the Munster pack grew into this unrelenting affair.

Clermont were magnificent from the kick off. Anyone who witnessed Peceli Yato at last year’s World Cup would understand the importance of containing this sensational athlete. But Yato’s ferocious charge in the opening skirmish saw Gavin Coombes easily fended and Keith Earls brushed aside before a ridiculous offload put Alivereti Raka over.

The second try rests on Shane Daly, and perhaps the new Irish winger could have avoided a deliberate knock-on and sin-binning, but the dam had already burst. Penaud got under Carley’s skin when signalling for the yellow card but, on review, the officials had no alternative. The replay compelled the ref to run under the posts.

It took Clermont another eight minutes to profit from their numerical advantage but during this period Wycherley was badly exposed. The 21-year-old, promoted for his European debut after James Cronin followed Dave Kilcoyne and Jeremy Loughman into rehabilitation, was pulverised by Rabah Slimani in the 14th minute scrum.

When Hanrahan, who finished with 24 points, made it five kicks from five early in the second half, Munster shot themselves in the foot as Daly fumbled the restart to gift Clermont an attacking scrum.

“You have it Josh,” roared a voice as the young prop re-entered Slimani’s hurt locker. Remarkably, Carley awarded the penalty to Munster. Stander celebrated by pursuing Yato to laugh in the giant Fijian’s exhausted looking face. The momentum shift was confirmed by their maul marching into Clermont territory.

And then, for a split second, Hanrahan blinked. He punted a penalty dead, which meant a Clermont scrum near halfway instead of defending their own tryline.

Again, Munster stayed in the fight. Hanrahan made it a six point game and when Judicaël Cancoriet was yellow carded – for an off the ball no arms tackle on Rhys Marshall – the outhalf coolly made it 28-25.

Next, when Coombes was penalised for not rolling away from his hefty tackle on Fourcade, Lopez landed Clermont’s only second half points to make it 31-25.

Craig Casey’s clever rugby brain was added to the party and the diminutive scrumhalf wasn’t long earning a penalty that Hanrahan kicked to touch. The maul got next to nowhere but Carley whistled Paul Jedrasiak for collapsing. Courageously, Hanrahan went to the corner again. Marshall piloted the drive into touch but Beirne stole the Clermont throw, only to be dragged to earth by Thibaud Lanen.

After some tense eyeballing between O’Mahony and the French heavies, Lanen was binned and Munster went to their lineout once more. O’Mahony neatly slipped the ball into Jack O’Donoghue’s pocket and this subtle shift in direction allowed Stander to be shunted over.

Clermont turned to Morgan Parra (Sébastien Bézy had been excellent) to retain some control as the contest descended into a spate of vicious confrontations. Stander more than embraced these rules of engagement with his choke tackle on Adrien Pélissié earning a Munster put-in. Josh Wycherley, perhaps buoyed by big brother Fineen behind him, screwed Sipili Falatea into the dirt.

“That’s the stuff that dreams are made of,” said Van Graan. “To start your first European game in Clermont against Slimani, one of the best scrummagers in the world and to come up with that performance is exceptional.”

Once again, Hanrahan rejected three points and the decision paid off with Kevin O’Byrne burrowing under the turf for their match winning score. Hanrahan’s conversion killed the game before he was forced off injured. A tiny blip on an unforgettable Munster night in France.