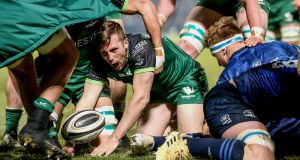 Jack Carty celebrates scoring one of his two tries in the opening half against Leinster. Photograph: Dan Sheridan/Inpho

Connacht brought an end to Leinster’s 26-match winning sequence in the Pro14 with a memorable and thoroughly deserved victory at a bitterly cold, RDS. It was the western province’s first win in Dublin since September 2002.

Jack Carty contributed 25 points including a brace of tries and while a fitting man of the match, it was a superb team performance that earned the triumph. The victory was underpinned by great energy, a ferocious commitment and determination on both sides of the ball, a superior kicking game and some crucial turnovers at the breakdown.

They hassled and harried Leinster, forced two intercept tries, and won many of the personal duels. It seems invidious to single out individuals because it was a superb team display but Tom Daly, Gavin Thornbury, Denis Buckley, Conor Oliver, Carty and Sammy Arnold were lightning rods for their teammates.

The defeat will hurt but Leinster can have no complaints. Their main concern will be that Johnny Sexton lasted just 23 minutes; he didn’t return following a HIA. The home side did manage a four-try bonus point but it is a mere crumb on a night when they fell further behind Ulster in Conference A and now makes next Friday night’s clash between the two at the RDS, a must win game for the defending champions.

Leinster were hit by a couple of late withdrawals, Thomas Clarkson (ill) and Josh Murphy (calf) crying off and were replaced by Lansdowne prop Greg McGrath, on debut, and David Hawkshaw with the bench reverting to an orthodox five/three split.

Connacht were first on the scoreboard and given the error strewn opening to the match it was apposite that it came from a mistake. Ross Molony, acting as scrumhalf at a ruck, fired out a pass that Carty read beautifully and the outhalf galloped 45-metres to touch down and then tagged on the conversion to push the visitors into a 7-0 lead.

He had a chance to increase his side’s lead on 13 minutes but tugged the 40-metre penalty attempt wide. Connacht though were rattling into the collisions and forcing Leinster into repeated handling errors as the home side could not establish any playing rhythm.

The only way they could escape their half was through the boot and Connacht shaded most of those duels in the opening 20 minutes. Devin Toner stole a Connacht throw five metres from the Leinster line after Carty’s beautifully judged kick to the corner.

The Connacht outhalf had an even more pivotal involvement two minutes later following a great break from his halfback partner Caolin Blade that took play deep inside the Leinster half. The visitors muscled their way closer before Carty took a great line from close range to crash over with assistance from Quinn Roux. The outhalf couldn’t add the conversion but the 12-0 lead was thoroughly deserved.

Leinster’s night got worse immediately when losing Johnny Sexton, who took a bang and then failed a Head Injury Assessment (HIA), replaced by Liam Turner, but an opportunist try by Scott Penny on 24 minutes gave them a brief lift. O’Brien shifted to outhalf with Turner joining Rory O’Loughlin in the centre.

A brilliant break by Ryan Baird, taken on by Dan Leavy took the home side to a few metres from the Connacht line but once again they conceded a penalty for not releasing. In some respects it epitomised Connacht’s relentless focus and application on both sides of the ball.

They won another kicking duel, Arnold hunted down Turner in the tackle, forcing a knock-on as the home side tried to run out of their 22. From the ensuing the scrum Alex Wootton was sent scooting over in the corner after the forwards had sucked in the Leinster defence.

Carty’s touchline conversion was a fitting embellishment personally and for his team based on the opening 40 minutes; in material terms three tries and 25-5, lead. It was hard to remember a half of rugby in which a Leinster team had been so thoroughly eclipsed.

The home side were brighter and more cohesive in the four minutes after the restart than they had been in the first half and on foot of a series of quick rucks captain Luke McGrath spotted a gap and raced over for a try which Jimmy O’Brien converted. Leinster’s discipline though remained an issue and they gave Carty a chance to land another penalty to leave Connacht 28-12 in front.

Leinster head coach Leo Cullen made three changes to the pack and one of those, Sean Cronin, played a vital role in his side’s third try, breaking off a lineout maul and providing Baird with a try scoring pass. The home side had lost O’Loughlin to injury and Jack Conan, a replacement himself after just four minutes for a HIA.

If Leinster thought matters couldn’t get worse, they had a try scored by David Hawkshaw, chalked off after television Olly Hodges asked referee Chris Busby to look at blocking in the build-up. Penny became the third Leinster player to go off for a HIA, forcing Leavy to return to the pitch.

Connacht had weathered a difficult third quarter and having survived the try scare and with the help of the bench they restored previous energy levels. They’re ability to hustle aggressively in defence earned a second intercept try this time for the outstanding Daly. He read Hawkshaw’s pass and converted the intercept into a try under the posts; Carty added the extra points.

Leinster did manage to eke out a fourth try through replacement prop Ed Byrne but the night belonged on Connacht, a brilliant win and thoroughly deserved.