Ulster grind past Munster in a frozen Belfast to stay unbeaten 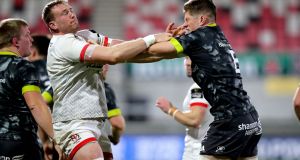 Kieran Treadwell and Jack O’Donoghue get to grips with each other during Ulster’s win over Munster. Photograph: Ryan Byrne/Inpho

Ulster took their conference wins to 10 in succession with a dug out five-point win in Belfast. Playing in temperatures of three below zero the home side seemed set for a bonus point win against a weakened Munster side.

With no Conor Murray, Peter O’Mahony or Damian de Allende travelling, Ulster went into the break with a 15-3 lead but finished the match 15-10 after a scoreless second-half.

With an injury-time try from replacement Darren Sweetnam, Munster earned a losing bonus point and some satisfaction that although they did not look as though they could have nicked the match in the last 40 minutes, they made Ulster’s day harder than they might have expected.

Munster fell under immediate pressure from a Billy Burns punt at the start and it didn’t take long for the home side to convert early dominance into points. Ulster opted for an attacking lineout from their first penalty forsaking an easy three points.

But Munster stopped the rolling maul and cleared only for Ulster to sting from the second lineout, James Hume sticking the ball on a sweeping forward Jacob Stockdale and the Irish fullback making big strides to open Munster before delivering to Matt Faddes wide right for Ulster’s first try after six minutes.

Three minutes later Ben Healy kicked a reply from under the posts for 5-3 before an unsympathetic pass from Faddes to Hume on the wing halted what looked like another promising Ulster attack.

Ulster may have become frustrated with lots of territory and position but little on the board. But that was defused on 17 minutes when what has now become a typical Billy Burns play, a weighted forward kick, landed perfectly for left wing Ethan McIlroy to run onto for the second try, John Cooney converting for 12-3.

Good defensive tackling from McIlroy on fullback Shane Daly saved Ulster from what could have been the first Munster try but when Matt Rea didn’t roll away, Cooney stepped up to keep the scoreboard turning over with a penalty and 15-3 lead to the home side going into the break.

Despite a yellow card to Billy Holland on the hour Ulster were often turned over or broken down, Chris Cloete taking a couple of superb balls at the breakdown, but a lot of it also coming from their own inaccuracies.

Healy missed a Munster penalty on 64 minutes and when the replacements began streaming in Ian Madigan’s crossfield kick almost had man of the match McIlroy galloping away.

Tom Aherne was just held up for Munster just inches short of the line as the match became somewhat chaotic with Ireland fullback Jacob Stockdale hobbling off with just 12 minutes remaining. But a brave Munster finish had them banging on the Ulster try line, Sweetnam picking up a loose ball and running in with Jack Crowley converting for 15-10.

Matsuyama gives Tokyo Olympics promoters some cause for optimism 01:00
Northern Ireland make history with qualification for Women’s Euro 2022 23:24
Chelsea see off Porto despite Mehdi Taremi’s spectacular late strike 22:34
PSG show a little backbone as they hang on to ditch champions Bayern 22:20
Graham Burke’s strike from halfway caps Shamrock Rovers’ fine night out 22:39
Here is your handy guide to sport on television this week