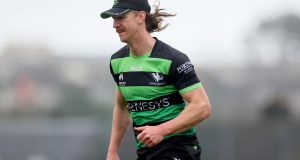 Former Australian Sevens player Ben O’Donnell is expected to make his debut for Connacht against Leinster at the RDS on Saturday.

The 2018 World Sevens Player of the Year nominee has spent the last three months since arriving in Galway continuing to rehab after tearing his ACL playing for the Australian Sevens.

However, Connacht coach Andy Friend, who gave O’Donnell his first start in Sevens, says the 25-year-old has “worked his backside off” since arriving in Galway, having finished with the Sevens programme last August.

“It is a real plus for us. He has spent the few months rehabbing, so whether he starts or comes off the bench has yet to be decided.”

O’Donnell, who began his rugby as an outhalf with Randwick in Sydney, can play anywhere in the back line, but more likely in the back three for Connacht.

Friend says O’Donnell has an “untenable way of breaking defences”, in addition to possessing a “good rugby brain”.

“He hasn’t played 15s for a while, so we’ll need to be patient, which we will be, but he’s just a very balanced rugby player who has got game smarts and can break a game open,” Friend says.

His readiness is timely given Tiernan O’Halloran and Colm de Butlear are both awaiting scan results on thigh injuries and are expected to miss Saturday’s match against Leinster.

And with three defeats against Racing 92, Bristol and Ulster, Connacht are looking at another four tough outings in both Pro14 and Europe.

“We were under no illusion that the last few matches were going to be tough. Racing away was tough, but we put ourselves in a great position and didn’t finish it. We were all pretty disappointed with the Bristol performance, and then disappointed again coming out of that game on the weekend, so that is sport. Having a bloke like Ben coming in is exciting for us, and we have Oisin Dowling coming back which is good.”

“They will be able to put their hands up and become available again, so we’ve got a good group of players who will start becoming available very shortly. That is the biggest difference between this time of year which is always a challenge, and last year when we were on the bones of our backside and we didn’t have the depth of quality coming back in.

“We have four big games of this block remaining, and then week off, which is much needed. We’ve had no break - the only squad that hasn’t had a break, but we need to hang on and fight like hell in these next four games.”

Friend says Connacht need to take the same attitude to the RDS that they did two years ago.

“We played an open style of rugby and when didn’t have the ball, we got in their face, made our tackles, shy of the last 10-minutes. I still remember, 17 points up with 11 minutes to go, but such is the Leinster juggernaut, they came over the top of us. So for 69 minutes we showed the type of game that can undo Leinster, so we know what we need to do.”