Jordi Murphy adapting to life in ‘a different country’ 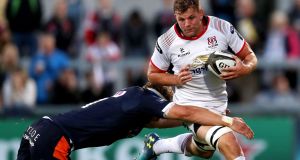 The lack of Euro? Union Jacks?

“I kept looking at the speed limit – how’s it dropped so much? Lucky I had a southern reg so I didn’t get too many tickets.”

The seriousness of landing in Belfast – after everything the club experienced in 2018 (on a rugby level alone, they lost a CEO, franchise outhalf, two head coaches, a gang of internationals to retirement, not mention the conditioning staff) – was cushioned by familiar faces.

“John Cooney took me into his home for a week or two, we were in the Leinster academy back in the day.”

Fluid player movement is no modern trend, it’s the new and essential reality of a successful professional game on this island.

“That’s just the way rugby is, people change clubs,” Murphy concurs. “Maybe not so much in Ireland but it might change in the future.”

Change has come and we know who is behind it.

Murphy had his hand forced last October when Joe Schmidt made some ruthless calls. Simon Zebo was completely frozen out a full nine months before the Paris switch but Murphy’s slide behind Seán O’Brien, Rhys Ruddock, Jack Conan, Josh van der Flier and Dan Leavy in the Leinster pecking order came at a price. That Tommy O’Donnell made the cut of him must have rankled the most.

“I just came to a crossroads last year when I knew something had to change. Every player’s ambition is to keep playing international rugby and I was left out of the November squad by Joe last year, and I just thought that I probably wasn’t playing enough with Leinster.

“I was stuck in a rut and needed a new challenge so I went to my agent and we started looking at places overseas but ultimately I wanted to stay in Ireland, and be under the IRFU umbrella, especially with the World Cup coming up at the end of next summer.

“Ulster, I had a good conversation with them and it really felt like the right fit. I’m delighted I made the move. It was a tough decision at the time. I’ve only ever known Leinster. I went to school in Leinster, I played seven or eight years with them but I was at the time of my career that I felt like I needed a change.”

After the contract was inked, the decision made, van der Flier and O’Brien checked out for the season, both crocked, but Murphy still couldn’t command the seven jersey as the age of Leavy had begun.

Leinster needed a number eight when Jamie Heaslip’s retirement was confirmed and Conan took a knee. Max Deegan and Caelan Doris were only fresh from the laboratory so Murphy climbed back into green and blue to win literally everything on offer – Grand Slammer off the bench against Scotland and at Twickenham before doing enough in the European and Pro 14 run-in enough to feature in all three tests against Australia.

“I think seven has always been my favourite position but it wasn't really about playing seven, I wasn’t playing that much [anywhere]. I just felt that there might be more opportunities elsewhere. I’m a player who can play across the backrow, and that’s always been a strength of mine...It was just about playing.”

When he shakes off an ankle injury that is what he will be doing in a backrow that should also include Nick Timoney, another teenage Blackrock captain forced north to continue his professional career.

“Basically, playing for Ireland was my main ambition. I’m glad I’m at Ulster for the foreseeable future and I’m going to do as well as I can. Hopefully that leads to playing more for Ireland.”

Simple really. Spread the ever expanding Leinster schools production line around the island.

“I don’t think the Leinster game I’m going to play this Christmas is going to be any less spicy.”