Simon Halliday insists rules on high tackles will not soften the game, but make it safer 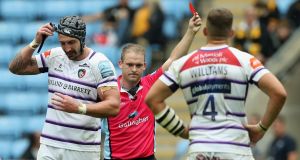 Will Spencer (left) of Leicester Tigers is sent off by referee Ian Tempest after a high tackle on Tommy Taylor during the Gallagher Premiership Rugby match between Wasps and Tigers in Coventry earlier this month. Photograph: David Rogers/Getty Images

Simon Halliday, chairman of European Professional Club Rugby (ECPR), has delivered a clear message over concussion fears ahead of the new season: the sport’s authorities need to protect players from what they are doing to themselves on the field but also what they are saying about the game off it, to avoid the same problems encountered by American football.

“It is the elephant in the room, isn’t it? There is a legal case going on right now in England with an Irish player [Cillian Willis]. The legal consequences don’t even bear thinking about for the game.

“We just have to look into the US and what’s happening in the NFL. They went through a period of massive denial and now you wouldn’t recognise it for the way they think about [concussion]. I do believe we are in that same boat.”

The EPCR, via Halliday, gave pre-emptive support for officials ahead of the Champions Cup returning next month. Following Leicester coach Geordan Murphy’s (since regretted) comments about the game going “too PC” live on BT Sport, followed by a raft of current and former players echoing the sentiment, EPCR and its chief sponsor took the opportunity of this week’s media launch to express “full faith and backing that our referees are going to look after the players”.

This stance was supported by Heineken’s Pat Maher, who added a hope that “we get wonderful match officials and consistency to protect the players”.

Halliday, who won 27 caps for England until 1992, is adamant the World Rugby diktat to red-card a shoulder to neck/head tackle will not soften up the game of rugby.

The former Bath centre directly contradicted Murphy’s comments about taller players being at a clear disadvantage under the new interpretations.

“Let no one tell you a six-foot-seven guy can’t bend over to make a tackle. It’s just not true. Everyone has a choice to tackle where they feel they should. Defence coaches will advise them on how to stop the ball being passed out of the tackle and may have to change the way they look at that.

“I don’t want to see or hear, on behalf of the whole competition, players or coaches disputing what is a clear set of guidelines.

“We are trying to change player behaviour so they go in and make safer tackles so the tackler and tackled person will both be safer.

“And we’ll probably get a much better spectacle where families, kids and mums will come flocking to the game in more numbers, as opposed to the risk of the reverse happening.”

On players criticising the recent spate of red cards for previously unpunished tackle offences – above the shoulder hits and leading with the elbow – Halliday stated: “Dare I say, we might be protecting the players from themselves on occasion because I speak to plenty of players – I know what their secret hopes and fears are . . . some are calling for more draconian measures.

It is about teaching old dogs new tricks, isn’t it?

“How can anyone say the game has gone soft? It is simply not true. I’m sure when you ask them in the cold light of day they don’t believe that.

“It is about teaching old dogs new tricks, isn’t it? [Rugby] is too dangerous so they have to change what they do.”

Halliday also stated the current instructions on how to referee the tackle will not become less stringent as the stakes are raised come the knockout stages of the Champions Cup.

European rugby does bring specific communication challenges which Halliday is confident will not lead to an issue.

“As a cross-border tournament we already have the challenge of different nationalities of referees coming from different competitions,” said Halliday. “We know that.

“With the increased focus, and not just from World Rugby but the medical profession, about the longer-term impacts of concussion and head contact, and with some of the variability of decision-making we have seen, from disciplinary panels and referees, our referees have spent a lot of time with Joël Jutge, who was one of the best referees in the world, working out what is the sensible and what is not the sensible approach.

“Our referees are the best in the world, it is the cream of European referees.

“At a two-day camp Joël has sat down in front of the TV with the refs and said, ‘That is acceptable, that is not, if that happens it is a red.’

“It is an education process, as it should be because we are the top club tournament in the world so we should be showing the way. I hope what happens this season and seasons following will trickle down into the domestic leagues.”

Resurrection beckons for Jamie Donaldson in Cyprus 16:39
Scotland end 18-year Welsh curse to finish on a high 16:31
Home comforts for Walker as he seals win for Man City 14:52
Valtteri Bottas pips Lewis Hamilton to pole position in Italy 14:47
New Zealand blow Australia away with record victory 13:22
Crossword Get access to over 6,000 interactive crosswords