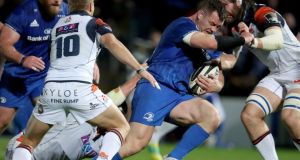 Leinster’s Cian Healy is tackled by Simon Berghan and Ben Toolis of Edinburgh during their match at the RDS Arena. Photograph: Dan Sheridan/Inpho

Henceforth, the stakes start to rise. A fortnight of no-holds-barred inter-pro derbies will lead in to the opening two weeks of European rugby. That defeat to the Scarlets in round two still rankles, but Saturday’s bonus point win over Edinburgh completed a satisfying opening four weeks to the season for Leinster and a particularly productive weekend.

The reigning double champions returned to the summit of Conference B, and in the process gained two points on Ulster, three on the Scarlets and five each on both Benetton and, of course, Edinburgh.

But after another round featuring some eye-catchingly unexpected results – the previously winless Southern Kings taking down unbeaten Glasgow for only their second Guinness Pro14 win, the Cheetahs and Ulster drawing 39-39, Cardiff’s bonus point beating of Munster and notably Connacht beating the Scarlets – Leo Cullen was quick to stress “so much is on the day”.

“You see some of the results over the weekend,” he said, citing the above. “So much comes down to the day, so you have to make sure you do everything in your power to be ready on the day in terms of preparation. Any of the teams are capable of delivering performances.

“There’s lots of bits of our performance that we can get better at now, so we’ll try and pull that apart now. We’re still a work in progress, so we’ll just try and get better every week. Next week is going to be a he step up again [against Connacht], particularly after what happened to us down there last year,” said Cullen, in reference to that 47-10 defeat last April.

“We know Connacht and the intent that they come with. They’ve a lot of players that have come through the Leinster system at different stages, so we know that they’re always very, very motivated when they play against us. We understand what that’s like so it’s going to be a good challenge.”

There were few lows in Leinster’s all-conquering campaign last season, but that record loss to Connacht was probably the lowest. “Yeah, easily,” admitted Cian Healy, for whom it was one of only two defeats he suffered last season.

Hence, while happy to bask in the glow of a Man of the Match performance, featuring 16 carries, the memories of that day almost visibly darkened his mood. It was the day John Muldoon bade farewell to the Sportsground, and no Leinster player looked more peeved about the retiring Connacht legend converting their seventh try. Healy admits he was not amused.

“No. Leave it to the kickers. I suppose, on a personal note, that was nice for him to finish off his career. But it is something you have to take a bit of offence to when you’re not taken seriously.”

He has no recollection of the post-match away dressing-room. “I was in a bit of a red mist. I wouldn’t remember what was said now. It wasn’t great. It was a pretty dark time. You need a response from those sorts of things and a good team gives a response.”

Granted two weeks to stew over that defeat Leinster beat Racing in the European final and then, another fortnight later, completed the double by beating the Scarlets in the Pro14 final.

Explaining his decision to rest a few front-liners, Edinburgh coach Richard Cockerill said: “They’re the best team in Europe, the best in the Pro14, you could bring your best team here, batter them to death and still get nothing. I chose to make changes, we’ve got Benetton and Cheetahs in the next two weeks, then Montpellier and Toulon, so we chose to rotate, and look after some of the international guys, we have to do that, but that’s a good side.

“They’re well coached, the system in the Leinster region works well, and they’ve got players coming through. The depth, I don’t know how many of the Grand Slam side was playing in that team, but there’s a few isn’t there?

They’ve got a lot of very good players and they recruit well, picking those one or two foreigners to strengthen that. They’re doing well. I don’t know, their budget is probably just a little bit more than ours...but that’s how it is, that’s life.”

Cullen confirmed that both James Ryan and Dan Leavy will be observing the return-to-play protocols after being replaced during the win over Edinburgh. Ryan was removed without recourse to a HIA by the Leinster doctor, while Cullen was still awaiting the results of Leavy’s HIA.

As for Leavy, Cullen said the flanker was replaced barely 10 minutes into his seasonal reappearance after taking a leading elbow into the face from Pierre Schoeman, who was sent off by referee Dan Jones.

“Dan will do his HIA and follow the return-to-play then.”