Keith Duggan at The Sportsground 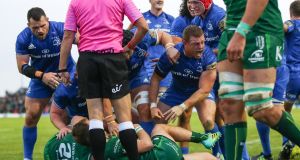 So the Muldoon Prerogative has been settled. Stung by the perceived insolence of the Connacht legend’s career-closing conversion at the end of this fixture last season, Leinster came to town and confined the home team to just a single kick between the posts on a chill Saturday evening in the Sportsground.

Jack Carty kicked Connacht into a lead with a second-minute penalty in what was a wonderfully charged atmosphere. But Connacht would not score again. They brought a ton of energy and defensive organisation and bravery to this encounter but just couldn’t break Leinster’s stellar cast.

By the end, Leinster had soaked up the worst of it and played the second half on their own terms, turning the screw until the sell-out crowd had to content themselves with something of the old defiance as the game was reduced to a lost cause.

Deep into the last quarter, trailing by what turned out to be the final score, Connacht stayed true to their values and tried to run the ball from their own 22, even after replacement prop Dominic Robertson McCoy was red carded for stamping on Josh van der Flier seconds after being introduced in the 70th minute.

Down a man; then losing replacement outhalf Craig Ronaldson three minutes later, Connacht kept trying to take something for the game but the closing phase was defined by a try-saving tackle from Niyi Adeolkun when Jordan Larmour looked to have ghosted onto his own chip-kick with that frightening speed of his.

Hate’s a strong word and all that but, then, so was the feeling emanating from the Shed towards the illustrious visitors when the encounter was still in the balance. Connacht have, in recent years brought something of the kid-brother-who-just-won’t quit to this tie and the raucous home crowd greeted every big tackle like a score. If the first half lacked for try-scoring silk and free running, it was compelling for the pure ferocity of the tackling and the collective aggression of the Connacht XV.

“There was a lot of feeling in that match,” Andy Friend, the Connacht coach, acknowledged later.

“You could sense that. And that’s what you want. You want people to care about it. I thought the Leinster defence was outstanding. We were throwing a lot at it but they didn’t seem to waver.”

A terrific Garry Ringrose try just 40 seconds into the second half gave Leinster a platform here. After a sustained effort of sharp and hugely aggressive defending throughout the first half, Connacht will be slow to forgive themselves for their slackness during the opening seconds after the restart.

First, Rob Kearney ran a straight, clever line into the Connacht 22 and when Ringrose took possession he danced around fringes of the Connacht line before looping back and then accelerating through a gap in the cover. Connacht may have had a case for obstruction but Ringrose was into the clearing without anyone laying a finger on him.

“We just talked about that,” Friend said after emerging from the dressingroom.

“There were moments in the game when we certainly matched them. But that is why they are a champion side: they hold that consistency for 80 minutes and there is no let up. We now know where we stand.”

Ten points ahead, Leinster sought to press home their advantage. In the 54th minute, Seán Cronin crashed over when Sexton used another Leinster penalty to find touch on the Connacht tryline. Cronin’s reward was an early release from duty for himself and his frontrow colleagues. Sexton floated the conversion from a tough angle and with a full quarter to go, the home team faced into an arduous uphill finish.

The first 40 minutes had a kind of who-is-going-to-break-first tension. Despite the fury of the exchanges in open play, the provinces were confined to a penalty a piece coming into the 40th minute. Carty set Connacht on their way with a second-minute strike but from that moment on, they struggled to breach Leinster’s 22.

A phase of play 10 minutes in caught the essence of the combat. The home team camped just outside Leinster’s 22, slinging the ball around with audacity and authority without making any ground, The home crowd loved it and the slick hands of Tiernan O’Halloran and Adeolukun opened up a glimpse of a gap on the Clan side, but it snapped shut just as quickly and the momentum petered out.

Carty tested the Leinster three-quarters line with two adventurous probing crossfield kicks, the first of which was taken brilliantly at speed by Cian Kelleher and the second, a measured chip, almost sent Adeolokun through. But in general, both teams seemed to content to just run the ball like crazy, daring the other crowd not to crack.

They didn’t but gradually the Leinster pressure began to force a series of penalties from the Connacht defence. Twice Sexton gauged the tricky town end breeze and thought ‘nah’, opting to kick to touch before closing the half with a close-range penalty. At 6-3 down, the home team were in a good place but with that half-glimpse from Ringrose, the opportunity of another famous night slipped away.

Replacements: Seán O’Brien for Ruddock (26 mins), James Tracy for Healy, E Byrne for Cronin, A Porter for Furlong (all 58). Rory O’Loughlin for Larmour (66), Ross Moloney for Toner, Ross Byrne for Sexton (both 76).

Knockout All-Ireland could be the way forward; Gerry Thornley on Ireland’s lineout 07:27
Eoin Morgan: More than England’s captain, Dubliner is the team’s touchstone 06:00
Gerry Thornley: Ireland don’t want to box themselves into a corner 06:00
Kevin McStay: Maybe a knockout All-Ireland Championship is the long-term solution? 06:00
Successful year for Stephanie Meadow takes her to LPGA event 06:00
Here is your handy guide to sport on television this week