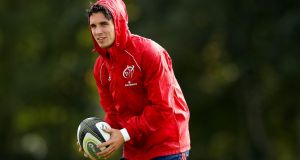 The tradition of Aviva Stadium matches with Munster, their popular reach and brawny size, have never failed to almost fill the Dublin ground.

The tetchy nature of the meetings and their particular familial feel has a prurience off of its own. Like brothers fighting, the jealousies and competition between people who are close can take such matches to more compelling places.

In that, an evening slot in the national rugby arena with the master in number ten jersey and the pupil in the other would provide an irresistible cameo to the main action.

The banished youngster Joey Carbery against the monolith at the heart of the Leinster team , Johnny Sexton, facing off for the first time in a conflict of the generations has a drawing, epic ring.

But probably, that is not going to happen. Probably, Sexton will be rotated out before the first of Leinster’s opening two weekends of the Heineken Cup at home to Wasps in less than two weeks and away to Toulouse the weekend after.

The realities, or, banalities, if Sexton is not rested this week he will end up playing six matches in succession. For a front line international that should make Jason Cowman, the IRFU S&C Coach, reach anxiously for his playing algorithms.

Sexton opened the season against Dragons and played 65 minutes. In Leinster’s second game against Edinburgh he was on the field for 66 minutes and last week in the win over Connacht, he had a 75 minutes run.

Carbery has been used more frequently than that by Munster. In his first two games for the province he came off the bench against Cheetahs and Glasgow before starting the last three games against Ospreys, Cardiff and Ulster.

In all Sexton has had 206 minutes of game time for Leinster this season and Carbery 267 minutes for Munster. The likelihood of the two 10s eyeballing each other across the Lansdowne Road turf is low, player rotation high.

“Yeah, certainly the challenge that we have that others don’t is that we play Friday night, we kick off Europe don’t we with the Wasps game? That does have an effect,” says Stuart Lancaster.

Leinster plays against the Premiership club in their first European pool match at 7.45pm in the RDS on Friday week.

“We play Saturday evening (against Munster), Sunday we’ll be off. But Monday, where we would traditionally be quite quiet will have to be a reasonably full training day. Tuesday we’ll be off and then we’ll go Wednesday and Thursday is captain’s run, Friday is the game.”

It will be a chance lost to see just where Carbery is in his development against a seasoned Sexton, although the coaches would cry unfair, that it’s too early to be pitching the two outhalves against each other mano a mano in such a high profile match.

Carbery, continually showing his qualities, remains on an outhalf learning curve. And Munster are wedded to playing him there otherwise there was no point to his move from Leinster in the first place.

“We’ll certainly have to manage the squad but I don’t want anyone to think we’re not taking the game seriously because it’s entirely the opposite,” adds Lancaster. “A pretty strong Leinster will be put out and I imagine a pretty strong Munster team.

“But I’d imagine both teams will have an eye on how many games they play this time of year with Europe coming around the corner as well.”

Munster are unlikely to play Carbery in eight matches in a row although they will also look to the November series of internationals and know that with Sexton fit, Joe Schmidt will not be in a position to give the Munster player anything but limited pitch time at outhalf. There is a world number two ranking to preserve.

If it happens that Carbery is released on Saturday in Dublin, Seán O’Brien, at least, will not be standing on ceremony. The flanker, playing at blindside last week, came through his first match eager for more. For him that’s as good as it can get.

O’Brien’s lengthy injury was as much a trial of the mind as a mending of the body. He is looking for pitch action to become match fit, his estimation two or three competitive games.

A suggestion that he might feel hesitant or contrite about smashing into Carbery, a player who has spent so many years in the Dublin dressing room, he takes as the most egregious affront.

“No. Not at all to be honest,” says ever the pragmatist with a don’t insult either of us look. “It’s just the way it is nowadays.”

It is. Especially with Josh van der Flier back and Dan Leavy in the mix this weekend having come through his head injury protocols.

Not everything happens at outhalf.