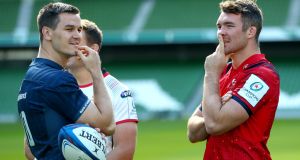 If Ireland front-liners such as Johnny Sexton and Peter O’Mahony aren’t risked in the last warm-up for European action, fans and players are missing out. Photograph: James Crombie/Inpho

For years, the Leinster-Munster fixture has been the marquee game of the Guinness Pro14. Since Leinster’s home clash with their rivals was moved to the redeveloped Aviva Stadium in 2010, it has averaged an attendance of 46,352, which must make it the biggest fixture in the global game below test level over the last eight years.

That is to be celebrated and nurtured.

This is especially true when one adds in the two Heineken Cup semi-finals of 2006 and 2009 at the old Lansdowne Road and Croke Park which were attended by 47,000 and 88,208 people.

Accordingly, over 46,000 tickets have been sold for Saturday’s renewal of the Leinster-Munster rivalry, but how many supporters were primarily motivated to purchase tickets in the tasty expectation of Johnny Sexton and Joey Carbery occupying the two number 10 jerseys? Might, therefore, they feel a little miffed come next Friday at lunchtime if, and as seems quite likely, neither Sexton, Carbery and a host of other Ireland front-line Test players are not named in the two line-ups?

When Sexton and others returned to action in the second round of the Guinness Pro14 at home to the Dragons, it seemed a tad premature, and when he was named for the third week in a row away to Connacht it was even more surprising. But come Friday lunchtime, when the sides for this fixture at the Aviva Stadium are announced, it might well make more sense.

Last season, admittedly after the rigours of a long Lions tour, Sexton didn’t return to play until the fifth round of the Guinness Pro14 at home to Edinburgh – one week before lining out against Munster at the Aviva.

The net effect though, is unless Sexton is to be rested for one of Leinster’s upcoming Heineken Champions Cup games – at home to Wasps at the RDS (for which there is a six-day turnaround) and away to Toulouse – it’s hard to envisage him playing six games on successive weeks. This would allow just one rest week before the November window which this season sees Ireland play four Tests.

Leinster will again be hardest hit by Ireland call-ups, but then again their provincial rivals would correctly argue that Leinster are the most heavily subsidised by IRFU central contracts

Into this category also falls Jordan Larmour, Garry Ringrose, Josh van der Flier, Jack Conan, Andrew Conway, Carbery, Tadhg Beirne and Peter O’Mahony, all of whom have played their side’s last three games in a row. The participation of Luke McGrath, Cian Healy, Devin Toner and CJ Stander, who have all played the last two weeks in a row and would therefore have to play five on the trot.

All the indications are therefore that the seemingly earlier return of a raft of Ireland’s tourists under the IRFU’s Game Management Programme was with a rest this weekend in mind.

The provinces will not only be missing their Ireland front-liners for the round seven games on the last weekend in October post-Europe, but that the Ireland-Italy game in Chicago on the first weekend in November also clashes with a full round of Pro14 games in which Leinster and Munster will be away to the Southern Kings and Toyota Cheetahs, while Ulster will be away to Benetton and Connacht at home to the Dragons.

Leinster will again be hardest hit by Ireland call-ups, but then again their provincial rivals would correctly argue that Leinster are the most heavily subsidised by IRFU central contracts. Furthermore, the IRFU’s Game Management Programme didn’t stop Leinster completing an historic double last season.

Leinster also have unrivalled strength in depth and, with the anticipated return of Jack McGrath, James Ryan and Dan Leavy, and a first start for Seán O’Brien, they’ll still field a strong team stacked with internationals next Saturday.

Take their return meeting with Munster in Thomond Park, traditionally held in December. Two Christmases ago, there were grumblings of discontent over Leinster making 11 changes to their starting line-up – which completed a back-to-back double over Northampton at the Aviva Stadium – for the meeting with Munster a week later in Limerick which was lost 29-17.

But last Christmas they made a dozen changes from the starting line-up which completed a double over Exeter Chiefs at the Aviva Stadium for their ensuing encounter with Munster at Thomond Park. Leinster’s 34-24 win remains Munster’s only home defeat since February 2017, and no-one was complaining. This season’s festive meeting might also be different, as it comes a fortnight after the back-to-back European games.

Ultimately, if Ireland win all their November Tests and emerge with a relatively low injury profile as the provinces return to European action in December, few will grumble. With the World Cup a year away, Team Ireland comes first, and that’s the way it should be.

But it’s another thing when both Leinster and Munster are denied a raft of Ireland front-liners. That’s taking us back to the late 1990s and early noughties when the provinces’ frontliners were often wrapped in cotton wool, and the fixture was played in Donnybrook, Temple Hill and Dooradoyle.

It was the evolution of the full-on rivalry between full-strength Leinster and Munster sides which, as much as anything, underpinned the revival in Irish rugby, and it fast-tracked both squads’ preparations for Europe at short notice either in October or post-Six Nations.

If the traditional end of October/early November meeting between these two Irish heavyweights is no longer to be considered the ideal means of preparing for a return to European action a week later, then it should be moved to another weekend when the fixture can more readily accommodate the likes of Sexton, Ringrose, Larmour, Carbery, Conway, O’Mahony and co.

Irish rugby’s biggest rivalry, the competition itself and the paying supporters deserve that much.