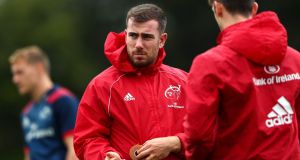 Munster’s JJ Hanrahan: he started the matches against the Cheetahs and Warriors at outhalf, before being replaced by Joey Carbery just after half-time in Glasgow. Photograph: James Crombie/Inpho

Cardiff Blues v Munster, Arms Park (7.35pm, live on Eir sport, TG4) Three defeats in as many matches by a combined total of five points illustrates the fine margins between success and failure for the Cardiff Blues to date this season, a sequence they’ll be desperate to alter.

It’s a tricky task, though, against a free-scoring Munster who have enjoyed thumping victories against the Cheetahs and Ospreys at home, but were well beaten in their only previous match on the road this season, against the Glasgow Warriors.

Perhaps the most interesting aspect of Johann van Graan’s selection for this game – there are six changes from the Ospreys win – is the positioning of JJ Hanrahan at fullback.

The Kerryman started the matches against the Cheetahs and Warriors at outhalf before being replaced by Joey Carbery just after half-time in Glasgow. Carbery received the nod for the Ospreys match, and now retains the jersey. The two players share a versatility that has seen them play both positions – Hanrahan is also a better than average inside centre – but the outhalf role in the one they covet.

Tyler Bleyendaal has resumed training, the talented former underage international Bill Johnston is among the replacements, while Irish international Ian Keatley isn’t in the match-day squad. There is only one number 10 jersey and it won’t be split five ways in terms of game time. That’s what makes early-season opportunities pivotal in discerning a pecking order.

CJ Stander makes a first appearance of the season, and his presence will be important in what promises to be a brilliant tussle at the breakdown on the strength of two high-class backrows that match up nicely. Darren Sweetnam has been exceptional, while there are some promising young players among the replacements, including former underage internationals Diarmuid Barron, Shane Daly and Johnston. If Munster are to win then the starting team must inflict the majority of the damage.

1 Seán O’Brien: Anger over my parents’ break-up never left me
2 Ireland get the job done against Italy to keep alive Six Nations hopes
3 France warm up for Ireland with impressive win over Wales
4 Ireland 50 Italy 17: Ireland player ratings
5 Hugo Keenan and Will Connors: The best of friends, the best of debuts
Real news has value SUBSCRIBE