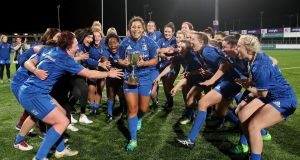 Leinster captain Sene Naoupu celebrates with the her team-mates after winning the interprovincial championship at Donnybrook on Saturday night. Photograph: Bryan Keane/Inpho

The women’s interprovincial championship had another nail-biting finish on Saturday night as Leinster regained the title thanks to a dramatic 14-all draw with defending champions Munster at Donnybrook.

Both sides finished the campaign with two wins and a draw but, with the roles reversed from last year, Leinster secured the silverware thanks to their superior scoring difference (+64 compared to Munster’s +37). Tenacious Munster almost pulled it out of the fire however, the conversion of Rachel Allen-Connolly’s levelling 80th-minute try was agonisingly missed by Niamh Briggs.

Leinster outhalf Nikki Caughey led Briggs three to two in their kicking duel at half-time, with the former Ireland captain opting to go for the corner when Munster got on top early in the second half. Laura Guest’s charges were struggling to breach the home defence and Briggs’s third successful penalty in the 63rd minute levelled matters.

That left enough time for the late drama with Linda Djougang hauled down within inches of the line before Leinster reset and touched down out wide through flanker Juliet Short with her fourth try of the campaign. Munster’s siege was successful in the dying minutes with outhalf Allen-Connolly capitalising on an overlap to notch the only try Leinster have conceded in the tournament.

The joy and agony was obvious when Briggs’s right-sided conversion, with the destination of the title riding on it, narrowly missed the target, leaving Leinster to collect the trophy in coach Ben Armstrong and captain Sene Naoupu’s first season at the helm. Connacht secured third place with a 31-17 bonus-point win at home to Ulster, the tries being shared out by Catherine Martin, Mairead Coyne, Amelie Roux, Ciara O’Connor and Anne-Marie O’Hora.