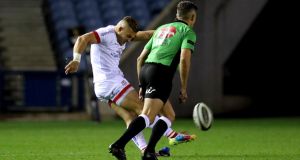 Ian Madigan buried a few ghosts in Murrayfield late Saturday night. Way back in his teenage days, Madigan had an opportunity to knock Kilkenny College out of the Leinster schools cup quarter-final. Deep into injury time he lined up a penalty, practically under the crossbar, only to whip it left and wide.

“It did cross my mind that maybe rugby wasn’t for me,” he admitted years after. “But I had great people around me like my dad and brother. They just picked me back up.”

That was 2007. Then there was his long range penalty to level up the World Cup quarter-final against Argentina in 2015. Missed that too. ‘In the clutch’ - to borrow the American phrase that describes game defining moments - is where Madigan has always existed.

“He is big time, isn’t he?” Dan McFarland smiled, sounding more like a sports agent rubbing a finger and thumb at IRFU chief David Nucifora than the victorious Ulster coach. “Anyone who knows Mads knows he is big time.”

His first strike, after John Andrew piloted the second Ulster mauled try over the Edinburgh line on 73 minutes, was from the same touchline where Billy Burns missed the conversion of Rob Herring’s earlier score.

Madigan calmly made it 19-all and extra-time seemed inevitable.

The second strike, at the death, was a 45-metre penalty after Edinburgh’s replacement hooker Mike Willemse deliberately knocked on Madigan’s pass. Referee Frank Murphy initially awarded an Ulster scrum but after touching his ear piece the Cork man gave Madigan an opportunity to shut down the entire show.

Jack McGrath, the big St Mary’s prop, was first to arrive for a bear hug and he stayed close to his pal for a little longer than usual.

These uniquely situated Pro14 semi-finals will always belong to one man. And Johnny Sexton will love that it is not him. But forget the big picture for a moment. Most people presumed Ian Madigan was done. He’d disappeared into the graveyard of players who threatened to exceed their potential only to pay the heavy price of being out of sight and therefore out of contention.

And then the 31-year-old goes and totally redeems himself with two kicks that reshape an already fascinating career.

What a club Ulster are transforming into. Avoid a heavy defeat this Saturday against Leinster at the Aviva and McFarland’s young coaching ticket can point to genuine progress.

It’s the first professional ‘club’ in Irish rugby, rather than a province, since Pat Lam’s Connacht captured the Pro 12 title in 2016. Leinster are still a province, a well-oiled machine evolving in a similar vein to big football university environments like Penn State or Alabama.

While Munster plunge into all sorts of turmoil, and an identity crisis they seem to have no idea how to solve, McFarland has methodically added and tended to a squad of players from all over the place. Seven locals and seven Leinster recruits were fielded alongside three South Africans, two Kiwis, two Aussies and two English men.

That’s what a modern club looks like. Ulster are alive again and heading south with a squadron of Dubliners who no longer feel the need to prove themselves against their former team. The prodigal son line is getting old to the likes of Madigan and Jordi Murphy. They’re just teak tough professionals in search of contact extensions and perhaps the chance to leave a legacy worth remembering.

Madigan is out the gap in this regard. What a prodigious, lucrative yet troublesome career he has had from Blackrock to that frustrating year in Bordeaux before a strange experience at Bristol and now Belfast. What a pair of scores he just landed in perfect contrast to JJ Hanrahan shanking the life out of Munster’s season on Friday night.

“Sometimes you just need to make a change and see how things go,” said McFarland of what looked certain to be a miserable ending to Ulster’s season when they trailed 19-7 with an hour played.

At half-time John Cooney made way for Alby Mathewson while Michael Lowry replaced Louis Ludik. This meant Burns was tasked with place kicking until McFarland unleashed his trump card.

These were huge calls for the coach to make. Same goes for the four international forwards who came off the bench to reverse the physical pummelling they were taking at the hands of Hamish Watson and Duhan van der Merwe. With the phenomenal Springbok Marcell Coetzee to the fore, Edinburgh wilted under the intensity of knockout sport.

“Sometimes cohesiveness takes a bit of time,” McFarland said of their last quarter revival. “I would have liked it a little bit earlier - like, kick-off against Connacht - but I’ll have a look and find out the reasons why that is the case but it doesn’t really matter now. We won that game.”