Leo Cullen: ‘the match itself I thought it was pretty brutal’ 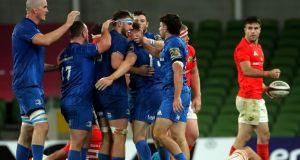 Semi-finals are all about winning. The rest is discussion. But although his team had just reached their ninth final in this competition in 11 seasons, Leinster head coach Leo Cullen freely admitted that their semi-final with Munster had been a “brutal” game.

“The match itself I thought it was pretty brutal. One for the purists for sure,” he added with a wry smile. “You’ve got to be very accurate against a team that all they want is box kick and apply that pressure game. So it’s tricky and there’s the interpretations around the ruck. That favours the defensive team probably more, it’s a tricky balance. It was not a great spectacle out there but for us it’s about winning a semi- final and getting through.

“Munster probably missed a couple of chances, they will say, in the game. Anyway, it is what it is. As I said we’re through and it’s on to the next challenge, so we’ll watch with great interest how Edinburgh and Ulster go,” said Cullen of the second semi-final in Murrayfield on Saturday.

“The conditions weren’t good. They were good in the warm-up but then in the last 10 minutes (before kick-off) the heavens opened and it absolutely lashed down and rained for 10 or 15 minutes. I was very inappropriately dressed in my suit at the time and it got fairly destroyed.

“Anyway, it was always going to be a bit of a dogfight after that big heavy shower came down; greasy conditions and all the rest, but it was just (a case of) getting through, wasn’t it? As I said, it wasn’t the prettiest.”

One of the most pleasing aspects of the win from a Leinster perspective will have been the the performances of some of the younger tyros, such as Hugo Keenan and Jordan Larmour in the back three, with the former switching to fullback after the latter’s departure with a head injury.

Will Connors did his chop tackling thing so effectively, particularly on CJ Stander, that he wasn’t replaced by Josh van der Flier until the 75th minute.

Ultimately perhaps the most influential player on the pitch was Caelan Doris, whose strength, carrying and innate footballing skills on the ball belie his 22 years, and it was also his jackalling that earned the penalty which sealed the 13-3 win.

“Yeah, Caelen was really good, dynamic in the carry and really hungry for work so it was pleasing for him. He’s still a young player coming through. He’s had a good pre-season, or lockdown period. He’s worked away hard during that period and he’s come back with the bit between his teeth, so to speak, and it was a good performance from him I thought against a good quality backrow for Munster with the likes of Peter O’Mahony and CJ Stander in there.”

Cullen accepted that, unusually for Leinster, they lacked some of their customary precision in the opposition 22. The champions don’t normally let their opponents off the hook as much as they did.

“Yeah, I think that’s probably fair. We had a few chances where we didn’t quite nail opportunities. Again though, I don’t k now whether it’s the players getting a little bit spooked. We’re on the attack and Scott Fardy, is it, whoop gets done for being off his feet?

“Again, I’d have to look back and is that Munster poacher supporting his body weight? It’s a tricky position for players because they’re nervous about those players getting rewarded for poaches. But we’re 10 metres out from the try line, we’re on good front foot ball there. But then we give away a penalty and then players are just that little bit edgy about giving away more penalties.

“ Yeah, we got caught out there at the ruck a few times. We just need to get better, or get better at understanding at what referees are looking for.

“You need to be very clinical in taking your opportunities in these type of games that are quite cagey against a team that kick the ball a huge amount. And for the most part I thought we dealt with that threat. There are lots of pleasing parts as well, because we know we’ll face that against Edinburgh or Ulster, and Saracens. They all kick a lot off nine.”

Giroud remains part of Chelsea plans, says Lampard 18:25
Crowds of 4,000 to return to sporting events in England from next week 17:32
Former Ireland assistant manager Maurice Setters has died aged 83 17:06
Davy Russell on neck injury: ‘it was a very close one and I dodged a bullet’ 17:00
Aidan Coleman steps in for the ride on returning Epatante 17:00
Here is your handy guide to sport on television this week