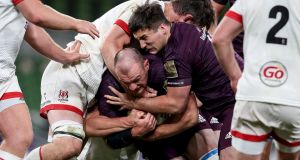 The aesthetics of the victory won’t trouble Leinster head coach Leo Cullen unduly as he watched his team grind out a victory. Having changed the entire starting team from the victory over Munster there was always going to be an element of disjointedness but there was nothing fortuitous about the win.

Cullen will reflect on being able to give game time to his extended squad and rest many of his first choice players ahead of what is expected to be a semi-final against Munster on Friday night at the Aviva stadium. It was their 23rd consecutive win going back to last season.

There were some excellent individual performances, Will Connors, Ciaran Frawley, Ross Molony and Max Deegan in particular. Tom Clarkson made his Leinster debut while Harry Byrne enjoyed a fine cameo late on, scoring one try and setting up another. Frawley was outstanding in the slightly unfamiliar position of inside centre.

Dan McFarland will be less enamoured. The Ulster head coach watched his team start slowly and although they managed to claw their way back into the match there were simply too many errors. He’ll also be keeping his fingers crossed that Jacob Stockdale - who had a very good game - is fit for the semi-final against Edinburgh in Murrayfield next Saturday, having limped off.

Ulster, for whom it was officially a home match although in Dublin, made a late change to the bench with David O’Connor replacing his brother Alan; the latter had taken a heavy blow to the head in last week’s defeat to Connacht. If head coach McFarland had hoped his side would dispel last week’s lethargic showing with a more robust opening, he would have been disappointed.

Leinster were 13 points up by the time the first quarter had elapsed and although the margin didn’t grow, nor did it shrink by half-time; the second 20-minutes was a morass of errors that sucked any fluency from the game, save for the odd snippet here and there. It would be a short highlights’ reel in that respect.

Ulster invested heavily in the box-kicking of scrumhalf, John Cooney, as an alternative to the direct carrying route map, some of it contestable, some poorly directed but as a gambit over prescribed for a team could ill afford to hand back possession to their opponents.

McFarland’s team showed on a couple of occasions that when they carried directly particularly in following up on a couple of line breaks from Stockdale at fullback, they could make inroads, sometimes all the way to the Leinster 22. Albeit that it didn’t yield any points in the opening 40 minutes.

This was down to excellent defensive plays from Molony, Frawley and Deegan but McFarland might be slightly miffed that his team weren’t effective enough at the breakdown in key instances.

Leinster too were guilty of some indiscriminate kicking, particularly in the wider channels, a mish mash of poor choices and execution. It made for a very staccato contest and there were precious few moments about which to enthuse.

One of those came as early as the second minute. Ross Byrne kicked a penalty into the Ulster 22 and from the lineout Frawley re-gathered his own grubber kick after Cian Kelleher and Matt Faddes had collided chasing the ball. Leinster pummelled away until prop, Ed Byrne, captaining the province for the first time marked the occasion by squeezing under the goal-line defence from close range.

Ross Byrne added the conversion and tagged on two further penalties as Leinster eased into a 13-0 lead, an advantage they maintained to the interval.

Gradually Ulster got more of a consistent foothold in the game with Marcell Coetzee, Kieran Treadwell and Sam Carter doing most of the heavy carrying but Leinster’s work at the breakdown forced multiple turnovers, while Ulster spilled too much ball in contact.

Ross Byrne kicked another penalty three minutes into the second half, as the match took on a shape familiar to the start before Ulster managed to break their scoring duck. Leinster conceded two quick penalties to provide access to their 22 and Ulster took full advantage with a well crafted maul that allowed Rob Herring to dot down. Cooney kicked the conversion to make it 16-7.

They seemed energised by the score and were soon on the attack again but another handling error allowed Leinster to escape their 22. Unfortunately for Ulster their most potent attacking threat, Stockdale, hobbled off soon afterwards.

Leinster’s indiscipline became punitive, costing them opportunity, territory and then three points, which Cooney gratefully delivered when kicking an easy penalty on 68 minutes. Ulster had the momentum on the pitch and the scoreboard but it changed with a superb piece of vision and execution from Harry Byrne.

His beautifully judged diagonal punt allowed Scott Penny to win a footrace and then show great strength to ride a tackle and stretch to touch down.

Cooney thought he had replied with a try for Ulster but following a review from the television match official, he was called back for offside and it was Harry Byrne instead who had the final word, scoring a try from close range which he converted.

1 Gerry Thornley: After 32 weeks the Six Nations is back up for grabs
2 Johnny Sexton aware of how Ireland can offer fans an escape
3 Extremes of sweet and sour for Solskjaer as Man United show signs of revival
4 Arsène Wenger: Arsenal was a matter of life and death to me
5 Stockdale and Ringrose on board with expansive Irish game plan
Real news has value SUBSCRIBE

Independent bookies under threat from Level 5 restrictions 17:43
O’Brien surprised at Buckhurst’s omission from Cox Plate 16:49
Johnny Murtagh to train for the Aga Khan in Ireland 16:40
Salwa Eid Naser cleared of anti-doping violation by World Athletics 16:38
Longford hand Cork a walkover in final Division 3 match 15:57
Here is your handy guide to sport on television this week