The Offload: Canterbury get Ireland women’s launch all wrong 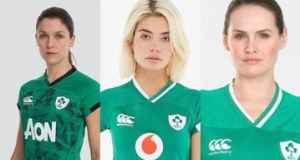 Canterbury have apologised for their handling of the Ireland women’s kit launch.

This should be the first class on the first day of PR School: ‘how to avoid a disastrous campaign.’

The way Canterbury of New Zealand - the IRFU jersey sponsor - went from ‘It is Covid’s fault we used models instead of female players for the jersey launch’ on August 23rd to a heartfelt apology on August 27th to - later that day, as the heat only intensified - “We pledge to photograph male and female rugby players” was not funny to the players they ignored.

Everyone associated with the “I am Enough” campaign - which Canterbury are suddenly spearheading - awaits the photo shoot and exact same appearance fee Robbie Henshaw received to promote the Ireland men’s jersey.

“The models you see above are from a 2019 photo shoot for e-commerce photography in the old jersey,” tweeted Canterbury amidst their catalogue of errors. “Our team have super imposed the new jersey on. Social distancing and player/photographer safety is important to us, so the women’s shoot hasn’t taken place yet.”

Canterbury has yet to superimpose the new jersey onto the body of an Irish female player. Munster and Adidas twisted the knife into their rivals by miraculously finding female players to snap despite the ongoing plague. For the record, the Munster models are Dorothy Wall, Chisom Ugweru and Meabh McElligott.

The message is clear now. Male dominated organisations only respond to one method of interaction. The current generation of female athletes are beginning to understand this.

“We’ve had enough,” tweeted Cliodhna Moloney among many, many others.

Pledge all you like, Canterbury, but until your money is where your mouth is the same old bait and switch game Irish female rugby players have been forced to swallow for decades will continue.

“Canterbury have done a really special thing by launching a women’s jersey for the first time ever and then to launch it in the way they did - I know there is another launch coming - but the idea of a launch is the first look. You can’t see something first for a second time. And it just showed to a lot of players ‘This is what we feel about you and your sport. This is the effort we have put into your sport and your jersey and representing that jersey.’” Florence Williams, Wasps rugby player and marketing savant, has her voice amplified by Sky Sports.

Rugby has waited 25 years for the first generation of guinea pigs - professionals untouched by the amateur era - to tell their story. Rugby has also waited a few years for a decent autobiography.

Usually we have been sold surface information, mere glimpses into the life of the sports star, but Dylan Hartley has, finally, ticked the most important box with “The Hurt.”

“I had a problem with artificial pitches,” Hartley told The Guardian. “Whenever I played on Saracens’, my knees would blow up and I questioned it with the Players’ Union...They said: ‘We’ll collect more data in a three-year study.’

“So we’ll be the human widgets - the crash test dummies - and you’ll get your data. By that time I’m fucked and after three years you’ll go: ‘Yeah, artificial pitches aren’t very good.’”

Former Ireland captain Dr Dion O’Cuinneagain - in these pages last Saturday - gave the private equity sharks currently circling rugby the perfect tagline. “It is the modern day gladiator sport,” said the brilliant flanker who was denied his 20th cap by a broken shoulder and wrist. “The athletes are getting bigger and faster, with that more money will get dragged into the game.”

Nowadays the necessary treatment Hartley used to receive day in day out comes out of his own pocket. “As an ex-player you fall off the cliff. So you do what you do in rugby. You live with it.”

Four Connacht players - Bundee Aki, Ultan Dillane, Jarrad Butler and John Porch - took a knee before beating Ulster last week at the Aviva stadium. The rest stood beside them, in a circle of solidarity described as a “unity moment” to combat racism. Nobody took a knee before Leinster played Munster.

Apparently, blacked out Instagram screens are sufficient protest for most people in our society.

If the overwhelmingly black NBA superstars’ refusal to take the court for the play-offs in their Disneyworld bubble proved anything, it is that talking and symbolism are temporary storms that white supremacists will always weather.

Refusing to play, as a form of protest, hurts sponsors and owners in the only place that can force permanent change. It still took an intervention from Michael Jordan, LeBron James and others before the white billionaire owners agreed to make their arenas available for minorities seeking to vote in November.

If, as the IRFU and players stated, Irish rugby wants to “transcend barriers and differences of race, gender, religion and sexual orientation” they will need to do more than support those who take a knee. And that could mean downing tools as a collective.

Rugby will not be able to avoid this global movement forever.