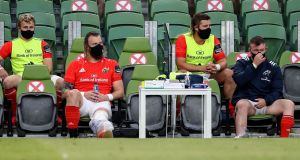 Munster coach Johann van Graan will have to drill down into his secondrow resources following injuries to RG Snyman and Jean Kleyn during Saturday’s 27-25 defeat to Leinster at the Aviva stadium.

There has been something of a glut of secondrow injuries around the provinces with Leinster’s James Ryan (shoulder) and Iain Henderson (hip) undergoing surgery while Connacht’s Gavin Thornbury (concussion) was taken to hospital and later released after taking a blow to the head during his side’s victory over Ulster on Sunday.

A medical update confirmed that Snyman underwent an MRI scan on a damaged knee that saw the Springbok hobble off in considerable pain early into his Munster debut. The immediate prognosis was that he might have suffered cruciate ligament damage. The province should confirm the extent of the injury at a media briefing on Wednesday.

Kleyn, who replaced Snyman, sustained a bang to his neck when carrying into contact and he too had to be removed from the game. The official release stated: “Kleyn was removed with a neck injury, underwent imaging in hospital and was discharged. He will undergo further imaging today (Monday) to investigate. Snyman suffered a left knee injury and will go for an MRI scan to assess further.”

It also confirmed that prop Dave Kilcoyne, who left the pitch at the same time as Synman, required an MRI scan on a damaged ankle. Prop James Cronin, a late withdrawal prior to the start of the match has a low grade groin strain and will be assessed by the medical team while Jack O’Donoghue is following the return to play protocols after suffering a concussion in training.

A sliver of good news is that fullback Mike Haley (calf) will return to team practice this week. Van Graan has already had to deal with the ramifications of a positive Covid-19 case of an academy prospect that forced six other players to self-isolate as a precaution a couple of weeks ago. There have been no positive tests since.

Ireland international secondrow Tadhg Beirne returned to the team environment last week following a minor lower leg problem and if fully rehabilitated represents an obvious partner for Billy Holland; the latter is likely to see plenty of game time in the short term.

Gavin Coombes, back after illness, and Fineen Wycherley are other secondrow options while the hugely promising Ireland Under-20 international Thomas Ahern and Paddy Kelly have been training with the senior squad. Eoin O’Connor and Garryowen’s Kevin Seymour have both played for Munster A. Van Graan’s team face Connacht at the Aviva stadium on Sunday (kick-off 3pm).

Dan Leavy’s return following his horrific knee injury edges ever closer but it won’t be against Ulster on Saturday at the Aviva stadium. Leinster assistant coach Robin McBryde explained: “Dan is so close to being back, he’s bouncing around the place and he’s got a permanent smile on his face because he senses he’s that close to get back to it.

“Obviously, you’ve got to be respectful and mindful of the physiotherapists who have been working closely with him. You’ve got to listen to them. He’s going in the right direction. We’ll wait to see how he goes.”

There was also positive news on the knocks sustained by Cian Healy (arm), Josh van der Flier (hand) and Johnny Sexton (thumb) during the win over Munster, all of whom were withdrawn as a precautionary measure during the second half of the game. They are each available for selection at the weekend, although there is no pressing need as Leinster are already assured of a home semi-final in the Pro14.

A minor back spasm meant that Leinster head coach Leo Cullen decided not to risk tighthead prop Tadhg Furlong against Munster but he too should be in the mix for duty this weekend, while the province would be hopeful that flanker Rhys Ruddock (quadriceps) could play.

Dave Kearney pulled a hamstring - there is no prognosis on a date for his return - and is ruled out while prop Vakh Abdaladze had surgery on a back issue and “will require further assessment in the coming weeks.”