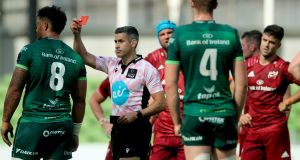 Far from the madding crowd the empty Aviva still produced some serious acts of craziness. Three yellow and two red cards in the opening 40 minutes proved beyond reasonable doubt that this was a tribal affair.

At least Abraham Papali’i was not the only sinner. Due to a stiff arm into Conor Murray’s jaw, that barely belongs in Rugby League, the Aucklander will never forget his cross code debut for Connacht.

That aside, Andy Friend has recruited precisely what Connacht needs at number eight. Powerful and mobile, the discipline comes next.

Whenever Munster held a numerical advantage they ruthlessly punished their opponents with the impact of Damian de Allende and Tadhg Beirne a huge bonus for Johann van Graan ahead of Friday’s Pro 14 semi-final against Leinster.

Keith Earls also looks in irresistible form before the quick return to Dublin to try and ruin their arch rivals’ run towards an unbeaten season.

Connacht, brilliant with front foot ball against Ulster, were cleaned out inside the opening 16 minutes.

The South Africans and Chris Farrell were in high spirits as they smashed through the green line. Poor Connemara native Colm de Buitléar was bumped twice in quick succession by De Allende and CJ Stander as Van Graan’s team wasted no time atoning for a bumpy restart to their campaign.

By the time former Munster flanker Conor Oliver returned from the sin bin it was 14-0. Connacht were fortunate that Murphy didn’t reduce them to 13 - for a stream of ball killing - but their pack was unable to slow the Munster maul. Chris Cloete rose from the pile of bodies after Peter O’Mahony’s aerial skills were to the fore.

The second score was a penalty try with Murphy walking under the crossbar after the seven man pack were wheeled and driven backwards.

The roars of Bundee Aki pierced the silence whenever Papali’i continued his conversion from League to union. Despite some bright moments, there is a little while to go yet. After a clean rip off Stander and a few rumbles in midfield, his ‘king hit’ on Murray resulted in a sending off on 26 minutes that ruined any chance of an upset.

The collision was straight out of the NRL. The build-up was full of entertaining menace, beginning when Aki being parachuted into the middle of the battle where he had a scuffle with Cloete after the flanker’s turnover on a grounded Papali’i.

It seemed like the big Kiwi number eight was only getting going. Not only did he shake Murray to his bones with a side on smash but the Ireland scrumhalf ricocheted into Farrell for good measure.

On review, Murphy stated that a red card was the only option because Papali’i’s forearm made contact with Murray’s head.

It will be interesting to see if the incoming suspension will be swallowed up by Connacht’s five week preseason - their campaign is over now - or if a ban will be carried into next season when the Pro 14 resumes in October.

Munster prop James Cronin missed no games despite a one month ban during the cancellation of rugby due to the virus.

Whatever happens, it appears that Andy Friend has unearthed a ball carrying gem who will be of enormous value in defence when they teach him to go lower.

Connacht’s afternoon turned into a complete disaster when Shane Delahunt was red carded for leading with his forearm into Stander.

“It was direct to the neck,” confirmed Television Match Official Olly Hodges.

Maybe these levels of aggression were in response to Munster’s physical dominance in the opening exchanges. Whatever prompted each act of foul play any chance of a competitive duel seemed ruined.

How wrong we were. It took no time for Jeremy Loughman’s finish from close range and JJ Hanrahan’s conversion to make it 21-0 but Connacht refused to fold and Murphy helped their cause by sin-binning Peter O’Mahony and Tadhg Beirne on the stroke of half-time.

At 13 versus 13, and 48 minutes on the clock, Aki powered over and Stephen Fitzgerald’s conversion made it 21-7 at the turn.

With a full complement back on the pitch, Munster began to run riot. There was space all over the field and Beirne wasn’t long picking a clever line through midfield after a slick pass by Murray.

Next, De Allende showed his class following another Farrell break to put Conway over.

Aki kept showing up for some wincing clashes in midfield with De Allende but Munster were unstoppable.

Johnny Sexton: ‘We just know we have to be a lot better in all areas on Saturday’ 15:36
Harrington keen on breaking her Breeders’ Cup duck at Keeneland 15:16
Neil Lennon brands criticism of Shane Duffy’s Celtic performances ‘hysterical’ 14:58
19 Premier League clubs sign up for new FA diversity code 13:52
Derry City Covid-19 cases leave Shamrock Rovers clash in doubt 14:01
Here is your handy guide to sport on television this week