Head-to-head: Midfield battle between Chris Farrell and Garry Ringrose will be key

The two Ireland internationals have impressed since rugby’s return 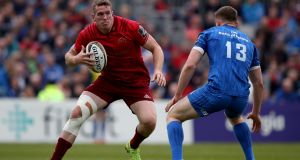 The midfield battle between Munster’s Chris Farrell with Garry Ringrose will be key on Friday night. Photograph: Dan Sheridan/Inpho

Why’s he so important? Initially took some ribbing from his Ireland teammates about being a ‘crash ball’ merchant, there is so much more to Farrell’s game as he has ably demonstrated both for his country and Munster. He runs good lines and is a handful for defenders who don’t get a solid shoulder on him in the tackle. He has also demonstrated good peripheral vision that coupled with a nice range to his passing and the ability to offload can make him difficult to shackle. He’s physical in defence and although in the embryonic stage of his midfield partnership with Damian de Allende there are signs that it could develop into a productive one. In a broader context, the man of the match the last time these teams met a fortnight ago, will be keen to impress Ireland coach Andy Farrell and reinforce his credentials.

Trivia: Born in Fivemiletown, south Tyrone, near the border with Fermanagh, his first love was soccer and he was a centre half for Clogher Valley before switching his attention full-time to rugby. An Ulster academy product he moved to Grenoble in France before accepting an offer to join Munster. On his Ireland debut against Fiji (2017) he formed a midfield partnership with Stuart McCloskey, the second time that the pair had played together; the first occasion several years before in a club game for Dungannon.

Why he’s so important? A testimonial from his Ireland team-mate Iain Henderson offers an insight into the transition from a lavishly gifted young centre into a polished and accomplished test player. “Maybe he came in still very young and quiet [into the national set-up] but he has grown into this position. For me he leads in what he does. If I see Garry’s name on the team sheet I know automatically he is going to put in a performance. For me that is a quality, a style of leadership that will instil confidence in all the players around him, that he is going to a job to the best of his ability.” Footwork, pace, balance, good spatial awareness, he hasn’t paused in his quest to be the best. A try scorer the last day and a catalyst for Leinster’s attacking patterns.

Trivia: At school he was sub scrumhalf on the JCT, played fullback in fourth and fifth year and it was only an injury to another player that saw him switch to the number 13 jersey. It is a role in which he has thrived for province and country. He’s scored eight tries for Ireland but also has a 100 per cent kicking return, having landed a touchline conversion in a Test match against the USA on a summer tour in 2017. He is an ambassador for LauraLynn, the Children’s hospice based in Leopardstown.