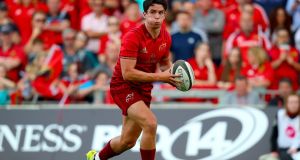 Munster’s Joey Carbery during his side’s Pro14 win against Cheetahs at Thomond Park, Limerick. The former Leinster out-half got 26 minutes of action and could be a massive player for the club going forward. Photograph: Oisin Keniry/Inpho

Mystery continues to surround the injury to Conor Murray as Munster head coach Johann van Graan took the unusual step to make no comment on his most valuable player after their bonus-point win against Cheetahs at the weekend.

The 29-year-old Ireland international scrumhalf has been sidelined with a neck or shoulder injury and could be set to miss out on Munster’s opening Champions Cup games against Exeter Chiefs and Gloucester in October.

But with the World Cup next year, and after his side scored six tries in their biggest opening-day success in Pro14 history, van Graan refused to clarify the situation.

“I can’t comment on Conor’s injury, I wasn’t in a position to comment on it on Monday. He’s got an injury and it’s positive, but we just have to take it day by day,” said van Graan.

Munster were far too good for their out-of-depth visitors, and once Cheetahs out-half Tian Schoeman missed an early penalty, van Graan’s side pulled clear.

Munster had a disappointing end to 2017-18 when they lost their Champions Cup semi-final against Racing 92, and Leinster dumped them out of the league at the same stage.

“I’m pretty happy with the first game but it’s such a long way to go. In a season, it’s my first full one, so there will be ebbs and flows. Not one team in this comp will go out and play well straight through, so the challenge for us is to be consistent,” said van Graan.

“Play an all-round game and do what we need to win games. And when we get into positions where we might not, hopefully we can find a way out of it.

“So, happy with the first week but that’s behind us now. Got to start again at zero. We go to Glasgow on Friday night which is a really tough opponent.”

Pretty happy with Joey. Slotted straight into 10, some good decision-making and then that nice pass he got away to Dave O’Callaghan for his try

The Warriors came to Connacht and won on Saturday, but Munster will hope to build on this impressive showing at Thomond Park.

It’s now three straight wins over Cheetahs, but a game against the 2015 Pro12 champions will be a true test of where van Graan has his players, in his first full season.

The introduction of Joey Carbery was a huge plus from the first round. The former Leinster out-half got 26 minutes of action and could be a massive player for the club going forward.

“Pretty happy with Joey. Slotted straight into 10, some good decision-making and then that nice pass he got away to Dave O’Callaghan for his try,” said van Graan.

“From day one I like an all-round game. There was perfect conditions and I want guys to make the right decisions. If it’s on you throw that off-load, if it’s not you keep it.

“To me it’s not a different kind of policy. We want to improve the individual. It’s something we worked on pretty well.”