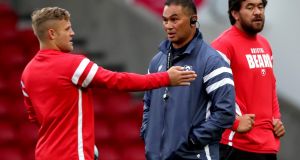 Bristol’s first season back in the Premiership is likely to have a significant bearing on whether the top flight is ring-fenced, according to the English Rugby Football Union.

The big-spending Bears begin their campaign against Bath on Friday and the RFU’s director of professional rugby, Nigel Melville, believes an immediate return to the Championship would push the Premiership closer towards a closed shop.

The RFU’s public stance on ending promotion and relegation has softened over the past 12 months and the union and Premiership Rugby explored avenues to pull up the drawbridge as recently as April. Ultimately, with 13 stakeholders and a reluctance to expand the league beyond 12 teams – as well as opposition from ambitious Championship clubs – no agreement has been reached.

Bristol return to the Premiership with lofty ambitions after splashing out on Charles Piutau, who misses out against Bath through injury, John Afoa and George Smith. Bankrolled by Steve Lansdown and rebranded as the Bears, their coach, Pat Lam, has targeted a top-six finish.

Last season Bristol were pushed closer than expected in the Championship by Ealing Trailfinders, an upwardly mobile club who have repeated their desire to play in the Premiership and who have the finances to compete. Mark McCafferty, the chief executive of Premiership Rugby, recently sounded a warning to the west London team and expressed concerns over the “unrealistic” ambitions of a club with an average attendance of considerably less than 1,000.

Melville agrees the gap between the two tiers is increasing and believes it will be telling if a club as well-funded as Bristol cannot bridge it.

He said: “The point that Mark made is the gap is massive. The gap to jump between one and the other is significant in terms of facilities, significant in terms of financing, and also making sure you’ve got a squad capable of competing. To go up and come down like a yo-yo club every year is probably not a good thing. If the gap continues to get wider and wider, it makes it more difficult to get up there. At the moment the dream is still there if somebody wants to go for it. It’s a really tough ask.”

Ealing have an equally significant match on Saturday, kicking off their campaign against London Irish, who were relegated from the Premiership last season. They remain committed to pursuing a Premiership place and point to the disadvantage the promoted team faces and the financial discrepancy between the two divisions because of the distribution of TV rights.

“We want strong, vibrant clubs where we can develop players,” added Melville. “That comes down to levels of wages. We need wages to be realistic, based on revenues coming in. That’s the same for any professional sport, for professional rugby and everybody else. If we can stay in two levels and promote and relegate every year, we can make sure that gap is not too wide and clubs are sustained and stronger, fine. But if we can’t, we have to look at it.”