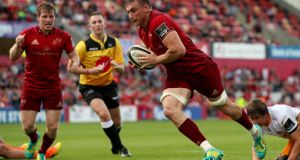 Ireland international Joey Carbery made his Munster debut off the bench as the province kicked off their Guinness Pro14 campaign with an impressive 38-0 bonus point victory over the Cheetahs at Thomond Park.

Following his much-talked-about summer move from Leinster, Carbery saw 27 minutes of second half action during which Tommy O’Donnell, JJ Hanrahan, Dave O’Callaghan and man-of-the-match Darren Sweetnam all touched down in front of a 12,265 crowd.

Earlier tries from Rory Scannell (15 minutes) and Dave Kilcoyne (30) had the men in red 12-0 ahead at the break as the new-look Cheetahs, now coached by Franco Smith, failed to convert their early pressure into points and suffered a big blow with captain Oupa Mohoje’s injury-enforced withdrawal.

The South African side, who had 10 PRO14 debutants in their matchday squad, enjoyed a bright start in the Limerick sunshine as they looked to stretch Munster out wide.

However, former Bordeaux-Begles fly-half Tian Schoeman drifted an early penalty wide and they then lost Springbok flanker Mohoje to a worrying knee injury.

The game burst into life on the quarter hour mark when in-form winger Sweetnam carved open the defence on a kick return and delivered a peach of a pass for centre Scannell to finish off in the right corner. It was a settling score for the hosts with scrum-half Neil Cronin, a younger brother of Leinster and Ireland star Sean, looking sharp on his first Pro14 start.

South African number eight Arno Botha was also making his mark for Johann van Graan’s men with a powerful series of carries. With tight passing and an increasing control of possession, the hosts came away with their second try when prop Kilcoyne sniped over from close range, with Hanrahan converting.

The gap remained at 12 points as Munster half-backs Hanrahan and Cronin continued to wield more influence on the resumption, although Academy back Shane Daly had to produce a tremendous try-saving tackle on Malcolm Jaer to keep the Cheetahs scoreless. Schoeman also missed his second penalty attempt soon after.

Munster’s third try arrived when the pressure was built off aggressive defence and breakdown and scrum work for openside O’Donnell to evade a tackle and score to the left of the posts. The otherwise dynamic Hanrahan, who finished with 13 points, narrowly missed the conversion.

After captain Billy Holland was denied by a TMO decision, Hanrahan claimed the bonus point score with Carbery, who took over at number 10, prominent in the build-up. The running of Carbery and Sweetnam heaped further pressure on the Cheetahs defence, paving the way for flanker O’Callaghan to get over in the 70th minute and Sweetnam pounced on a loose ball to run in the sixth try from 50 metres out.