Cooney gets Ulster off to the perfect start 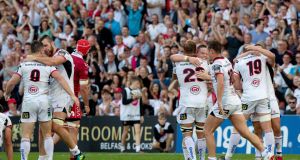 John Cooney snatched victory for Ulster in the final minute of this edgy battle at the Kingspan with his fifth penalty taking the game beyond the Scarlets.

New head coach Dan McFarland had the ideal beginning to his time in charge at the province though the game was in the balance throughout with neither Ulster nor the Scarlets ever really dominating.

The Scarlets ended up playing the final 13 minutes with 14 men after both Ed Kennedy and then David Bulbring were shown yellow by referee Marius Mitrea - the latter for an early tackle on Cooney which gave him the penalty to win the game.

The visitors - shorn of Jonathan Davies who was a late cry-off - scored the only try of the game when Rhys Patchell crossed in the first half but last season’s beaten Pro14 finalists had to be content with a losing bonus point.

Six minutes in and the visitors had the lead. After earlier having nearly crossed when Blade Thomson had broken free, this time Scarlets put a penalty into the corner, mauled infield and Rhys Patchell broke took the ball on the short side to break Cooney’s attempted tackle and score.

Patchell then converted his own effort from the touchline and Scarlets led 7-0. Cooney then narrowed it to 7-3 with a 12th minute penalty from a scrum.

Four minutes later and Cooney’s second penalty cut the Scarlets’ lead to 7-6 following a high tackle on Craig Gilroy. Ulster then had the lead on 26 minutes courtesy of Cooney’s third penalty, following some impressive approach play.

He failed, though, with a long range effort in the 39th minute which jut fell short and Ulster trooped off 9-7 up.

The half began with Scarlets’ skipper Ken Owens having a score ruled out by the TMO with Nick Timoney helping prevent what seemed a certain try under the posts.

But 13 minutes into the new half and Dan Jones - on for Patchell - landed a long range penalty to put the Scarlets back in the lead at 10-9.

Their lead lasted just five minutes as Cooney kicked his fourth penalty after Jones nailed the scrumhalf without the ball. Yet again, though, the Welsh side edged in front and after Ulster failed to deal with the restart Chris Henry was pinged at a ruck with Jones putting the Scarlets 13-12 up.

Then, with 13 minutes on the clock, replacement Ed Kennedy was yellow-carded for leading with the shoulder on Henry Speight.

It looked like Ulster had missed their chance when Cooney missed a penalty with four minutes remaining but after Ross Kane’s break saw the scrumhalf taken out by Bulbring, the Leinster native made no mistake to snatch the four points with that last minute shot.

New money gets one over on old money as Man City defy Uefa 09:08
United slip up in top four race; reasons to be cheerful for Munster 07:00
Solskjær says Man United did not deserve to beat Southampton 06:36
Gerry Thornley: Munster will make for interesting case study when rugby resumes 06:30
James McClean says he gets no support for abuse he receives 06:34
Here is your handy guide to sport on television this week