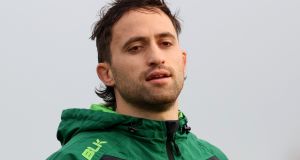 This rescheduled fixture might not quicken the pulse but it matters to Connacht coach Andy Friend after the Ospreys game fell foul of coronavirus.

“Last week’s late postponement was very disappointing and put us in a tricky position regarding our selection for this week,” said Friend. “In the end we believe it’s only right that the squad selected last week will get another chance to impress. We’ve got seven weeks of European games and interpros ahead of us, so we’d like to get minutes under the belts for as many players as possible.”

There is one change with Caolin Blade slipping into scrumhalf after Kieran Marmion was held by Ireland despite missing out on the match-day squad to play Scotland.

The Italians travel to Galway without the 10 internationals named in Franco Smith’s Azzurri team to face Wales.

Nothing short of a bonus point will suffice as Connacht seek to transform a middling campaign to contender status. This remains a realistic goal in 2021, with Paul Boyle apparently shaping into a genuine leader in a backrow alongside Sean O’Brien and Conor Oliver that screams potential. It is also worth peering in on the development of burly young tighthead Jack Aungier.

Also, Ian Keatley returns to The Sportsground as an inside centre.