The value of scrums is beyond question, but they’re taking up too much game time 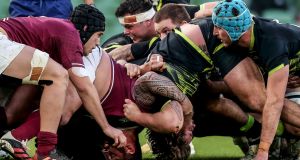 The scrum took a giant bite out of the match clock during Ireland’s Autumn Nations Cup victory over Georgia at the Aviva stadium; a whopping 21 minutes and four seconds give or take, which constitutes just over a quarter of the match.

It’s a staggering figure but unfortunately increasingly commonplace these days, reflected in the fact that, according to one source, a threshold in excess of 20 minutes was broadly similar to the accumulated time afforded the scrums in New Zealand’s Tri-Nations victory over Argentina on the same weekend. It was interesting that four minutes of a 10-minute yellow card in that match were taken up by scrums.

Before the frontrow brotherhood goes from nought to umbrage in considerably less time than it takes to set a scrum, this isn’t a column calling for the scrum to be depowered or emasculated, or one that fails to recognise its potency as a method of destabilising opponents. But, to preserve its integrity, it can’t continue to consume large swathes of game time.

Awarding a penalty or a card is regarded as a positive action to address scrum issues, irrespective of whether or not it is a correct decision

There were 18 scrums at the Aviva stadium; eight resulted in penalties, five were re-set and three of those took over 100 seconds from referee Mathieu Raynal’s first whistle to a scrumhalf putting the ball in.

The average match time for a scrum was 67 seconds, a figure that is skewed slightly by those requiring a re-set. In the baker’s dozen that didn’t require a take two, the average scrum time drops to a fraction under 59 seconds, but it is still too long in the greater scheme of things and it’s something that grates with supporters.

Raynal – put his interpretation to one side – didn’t equivocate when it came to deciphering the “pictures” that he saw at the scrums, awarding eight penalties in the first 12. He maintained a constant dialogue with the players, by turns encouraging them when they got it right and warning them about specific repeated transgressions.

However, when basic compliance is still an issue 55 minutes into a game – the time the last penalty was awarded by the referee – and there had been minimal alterations to the respective frontrows, he might have regretted the initial leniency in not going to his pocket for a card. That sanction, though, generally requires a repeat offender(s) before it is implemented.

It seems that awarding a penalty or a card is regarded as a positive action to address scrum issues, irrespective of whether or not it is a correct decision. A series of re-sets is “officially” construed as a negative, whereby a match official can’t effectively control or get a communal buy-in for that particular set piece, despite laying down the law in his pre-match chat with the respective frontrows.

In defence of the players, some match officials (the assistant referees on the touchlines generally have an input into calling penalties so at least three different people are interpreting what they are seeing) have a good feel for the scrums, while others appear to be taking a bit of a punt; albeit acknowledging that it can be very tough to decide who is doing what to whom when the whole premise is essentially to bend/break the laws to eke out an advantage.

The last five scrums in the Ireland game weren’t all perfect; two could have led to penalties but, once the ball was playable, Raynal adopted a more laissez-faire approach. There were times when he tried to speed up the process by cajoling the respective packs to get sorted more quickly, but his entreaties rarely had the desired effect.

Players used the break in play for a scrum as a chance to catch breath; it is therefore not a surprise that the quickest scrum of the game, 33 seconds, came after a long break in play because of an injury. The longest, 107 seconds, was one of five re-sets, four of which resulted in penalties.

World Rugby have tried to refine the scrum from a safety perspective, a positive initiative, but now face another problem in effectively addressing one facet of the game that’s commandeering too much time. The most obvious solution is to stop the match clock from the moment of the infringement until the packs are ready to engage.

That’s a potential solution at Test level but, further down the rugby chain, it’s unworkable for club and schools matches. There is another issue that games are edging closer and closer to two hours to complete in real time. Technical excellence and dominance in the scrum should be rewarded, but a balance has to be struck; taking up over a quarter of a game for the scrums should not become a feature of the modern game.