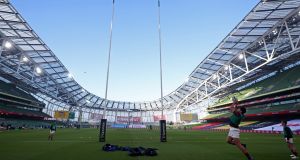 Ireland will take on Scotland at the Aviva Stadium this Saturday. Photo: Niall Carson/AFP via Getty Images

We are into December and a difficult year for Ireland is soon to reach a conclusion, as the finals of the inaugural Autumn Nations Cup are played out this weekend.

Designed to fill a gaping hole in the international calendar, while also providing some entertainment for supporters, the tournament hasn’t quite hit the spot.

In truth, much of it has been a chore to watch. None of the fixtures have been classics, with defences dominating and teams all too happy to kick the ball away.

There have been the occasional moments of individual brilliance – Jonny May’s try against Ireland, Jonny Williams’ score against England – but on the whole it has been pretty stodgy fare.

For Ireland and Andy Farrell the Nations Cup has provided more questions than it has answers, and Irish rugby finds itself with plenty of soul searching to do as Christmas approaches.

There was an air of predictability about defeat to England at Twickenham and the manner of it. In some ways, the disjointed performance during last weekend’s win over Georgia was far more sobering.

But let’s not despair. Scotland come to Dublin this weekend and there are still 80 minutes left for Ireland to ensure they end 2020 on a high.

Here is everything you need to know ahead of the Autumn Nations Cup finals.

The finals weekend of the Autumn Nations Cup, with Ireland welcoming Scotland to the Aviva Stadium.

All of Ireland’s Nations Cup matches are being broadcast free-to-air by RTÉ – Saturday’s game is live on RTÉ 2 with coverage starting at 1.30pm. In the UK the match is being shown on Amazon Prime, which also has the rest of the finals, including England against France on Sunday. And, as always, you can follow the action via the Irish Times liveblog which will be fired up from around 1.45pm.

What are the fixtures and results?

Ireland opened their campaign with a comprehensive 32-9 win over Wales but it’s all been downhill since there. They followed it up with an 18-7 defeat at Twickenham before grinding their way to a 23-17 win over Georgia last weekend. Two victories were enough to secure second place in Group A and set them up with a finals weekend clash with Scotland, who finished second in Group B.

Gregor Townsend’s side have only played two fixtures – a win over Italy and a defeat to France – and were awarded a 28-0 walkover after Fiji were forced to pull out of their pool fixtures due to a coronavirus outbreak. Scotland’s defeat to Les Bleus was their first in six Test matches and they will fancy their chances against a beleaguered Ireland side.

On Sunday England meet France to see who will be crowned the first ever Nations Cup champions. The World Cup runners-up thrashed Georgia before outgunning Ireland and Wales in two physical contests. France meanwhile won a hard-fought clash with Scotland in Edinburgh before thrashing Italy in Paris last weekend – they are set to be heavily depleted due to a legal dispute with the Top 14 meaning the majority of their front line players won’t be available. Indeed, none of the side who beat England in the Six Nations in February will feature.

So far Fiji have been unable to fulfil any of their Nations Cup fixtures after their squad was gutted by positive coronavirus tests, and they were handed automatic 28-0 defeats for all three group games. However the Pacific Islanders will finally get a deserved run out this weekend as they take on Georgia at Murrayfield on Saturday – it will be good to see them in action.

The world was a very different place back on February 1st when Ireland edged out Scotland 19-12 in their opening Six Nations match, with Stuart Hogg botching the chance of the match for the visitors. Had he scored the Dark Blues might have been able to force a rare win over Ireland – Ireland have won eight of the last 10 renewals of this fixture in a run dating back to 2013, including a 27-3 victory at last year’s Rugby World Cup.

It’s a tricky time for Irish rugby at the moment both on and off the field with the financial impact of Covid-19 causing problems. However, this week Gordon D’Arcy writes that performance director David Nucifora is not helping matters by refusing to be accountable to the public.

England’s Matt Carley is in charge in Dublin on Saturday.

It’s likely to be cold, with a bit of rain about.