Ireland head coach Andy Farrell says that Johnny Sexton has recovered from a hamstring injury, as he names his strongest possible team to face Scotland at the Aviva Stadium. Video: VOTN 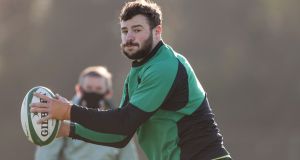 Ireland coach Andy Farrell has named the strongest possible team to face Scotland on Saturday at the Aviva Stadium.

Johnny Sexton, having recovered from a hamstring injury, relieves James Ryan of the captaincy with 11 of the players who captured the 2018 Grand Slam at Twickenham included in the starting XV.

The four players not involved that day are Robbie Henshaw, Hugo Keenan, Caelan Doris and Rob Herring, who is selected at hooker ahead of Ronán Kelleher after a solid lineout throwing display in an otherwise disappointing 23-10 victory over Georgia last Sunday.

Munster captain Peter O’Mahony continues at openside flanker, with Doris at number eight and CJ Stander on the blindside, as Josh van der Flier returns to the bench. Will Connors and Tadhg Beirne miss out.

Ulster and former Trinity College prop Eric O’Sullivan is set become the 11th new Ireland cap in 2020 off the bench. Finlay Bealham, who struggled in the scrum against Georgia when selected at loosehead despite playing most of his rugby for Connacht at tighthead, has dropped out of the matchday squad.

Ross Byrne is retained as cover for Sexton despite the promotion of his younger brother Harry Byrne to the Carton House bio-bubble this week.