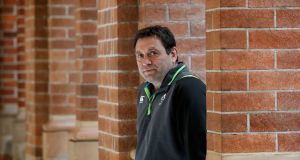 The IRFU’s refusal to enter negotiations despite 50 per cent of their professional players being out of contract next July has led to agents offering some of Ireland’s top internationals to French clubs.

The agents believe their hands have been forced. “In the next couple of weeks we will have firm offers from clubs in France and the IRFU have not engaged or made any offers at all,” said a senior sports agent. “It’s seems absolutely bonkers.”

The Irish Times has spoken to several leading rugby agents – all spoke anonymously to avoid damaging their clients’ future prospects – and many believe that IRFU performance director David Nucifora is stalling talks until French and English clubs have completed recruitment for next season.

“Is [Nucifora] waiting for French and English clubs to do their business? Of course he is,” said another agent. “It is nothing to do with money. The IRFU leave the negotiations as long as they can because they know there will be less options.”

Nucifora is refusing to meet player representatives even in an informal setting.

A veteran Irish international also says that “very limited information” is being relayed to players. And there is a growing fear that they are missing out on opportunities to move abroad which, in turn, allows the IRFU to come in with “a low-ball offer when other options have evaporated”.

Another agent, however, expressed sympathy for Nucifora’s inability to fully know the IRFU’s financial position until the Government makes a decision on crowds returning to stadiums in 2021.

“It has actually worked out very well for players to be aware of their options outside of Ireland. Normally the top-end players don’t get this opportunity as the IRFU and the provinces are very proactive in initiating contract discussions,” said the agent

Initial conversations have occurred between agents and the provinces, so players could be informed that they are wanted. However, no financial offers can be made until Nucifora says so despite up to 100 professionals being out of contract next summer.

The performance director said on Monday there will be no discussions until after Christmas.

An agent also noted that “positive news around vaccines and the likelihood of crowds returning before next season” would alter the value of each deal.

Nucifora, who has administered the professional game in Ireland since 2014, reiterated this week that selection for Ireland will only be open to players contracted to Connacht, Leinster, Munster and Ulster.

Another agent cannot understand why Nucifora – the twice capped Wallaby hooker – has not chosen to negotiate contracts that can be increased or reduced based on income the IRFU earns from supporters entering stadiums next year.

“There is a way of dealing with that if the IRFU say, ‘here is the offer we are willing to give in normal circumstances – that is your value – but there is a phased reduction that goes up and down whether we are at 25 per cent, 50 per cent or 100 per cent capacity.’ ”

“I know there is a lot of frustration on the players going into Christmas with no security.”

Contractual limbo is likely to increase stress levels within the national squad. The failures of 2019 were largely put down to “performance anxiety”, and head coach Andy Farrell has revealed that sports psychologist Gary Keegan is working on the squad’s mental skills, while former team manager Mick Kearney continues to pair players with business mentors to prepare for a post-rugby career.

Keegan previously worked with Leinster, the Dublin footballers, the Tipperary hurlers and Irish boxers at the Athens and Beijing Olympics.

“For a lot of our players it isn’t just the stress of a match week, they are dealing with life outside of rugby that can build up in a different manner,” said Farrell. “I know where everyone is at individually but, honestly, from the feeling in the group you would never know that is at the forefront of their mind, which is a massive credit to them.”

To the suggestion that one-year deals might satisfy veterans like Peter O’Mahony, Johnny Sexton, Tadhg Furlong, Keith Earls, Iain Henderson, CJ Stander and Cian Healy, in the hope of a financial recovery 12 months from now, an agent replied: “One-year deals don’t work. You can’t be advising that unless the player is in the absolute twilight of his career, like a Dan Carter-type figure, who has only has one more season in him.

“If you get offered a one year contract you know you will be back having the same conversation next Christmas. I would really hope the IRFU are more long sighted than that.”

Media reports have already linked Ben Healy, the 21-year-old Munster outhalf who qualifies for Scotland via family, to Glasgow Warriors. Healy, and several more senior players, will be seeking an meeting with Nucifora before Glasgow and the other foreign clubs fill their rosters.

“I suppose it’s just about the business being responsible and making sure that we are in a position when we do enter into negotiations [that] we know exactly where we stand and anything we put on the table we will be able to stand up with our players,” said Nucifora on Monday.