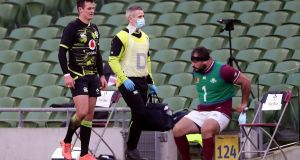 After Ireland’s increasingly grim 23-10 win over Georgia at a fittingly empty Aviva Stadium, head coach Andy Farrell was no less damning in his assessment than almost everybody watching.

“Certainly in that second 40 it wasn’t the standard we expect from ourselves, especially playing at home after the first 40 that I thought was decent enough at times. There were still obviously things to fix at half-time but two tries, (plus) one from a forward pass and I don’t know the rules any more regarding that,” he said of the decision by Mathieu Reynal to chalk off a fine finish by Stuart McCloskey from a long floated skip pass by Jacob Stockdale.

“We have a touchjudge that telling us it’s a try and then a referee that says it’s not a try. James Ryan is over the line just before half-time, he’s got the ball down, so he says,” added Farrell.

“So there’s still things to fix. I thought our game flowed a little bit in the first half and we come out in the second half and I just thought we didn’t have the courage of our own conviction.”

“Georgia thoroughly deserved the right to slow our game down by being total menaces at the breakdown and fair play to them for that but that’s not good enough from us.”

Reflecting specifically on that second-half, Farrell spoke of what he called “the bigger picture stuff”.

“If you haven’t the courage of your own convictions then you follow through with whatever it may be...If you are trying to get the ball to the wide channels, let’s do it properly. Let’s make sure that there’s proper intent in our play to get in there.

“There certainly was opportunities for us to get into space out wide and we just tucked and turned ourselves back inside on a number of occasions and got turned over at the breakdown.

Farrell conceded that poor third quarters have become a mite too commonplace and this is a concern.

His mood wasn’t lightened by a lengthening injury list.

“I don’t know what to say really, there’s quite a few. Rob Herring has something he needs to be looked at regarding his rub. Billy (Burns) felt something in his groin in the warm-up. He said he was fine to play and played a nice first 40, I thought, but he’s nursing a groin injury.”

“Conor (Murray) got a bang, a dead leg, so we have to look after him but he’ll be fine. Will Connors came off for a HIA so it’s a six-day turnaround, we’ll see how that goes. Keith Earls had a back spasm and had to come off as well, so quite a bit of disruption but that’s nothing to do with the second-half performance.”

For all these reasons next Saturday’s third-place play-off in the Autumn Nations Cup against Scotland is looming more disconcertingly than would seemed likely at the outset of this hybrid competition.

“I think they’re a big threat,” Farrell said of the Scots. “They’re playing well, they play a nice brand of rugby and the last time we played them here, it was a difficult match. They played really well that night so I’m sure after watching that second-half performance and taking stock of what happened in the Six Nations, I’m sure they will see that as an opportunity that they might try to take back, so we’ll see what we’re about this week.”

The Georgian coach Levan Maisashvili said: “To I am proud of my team. In attack the boys scored an excellent try but you could see again a couple of opportunities which we missed. We are a young team, we are still growing and we try to be step by step better and better. Yeah, I’m proud.