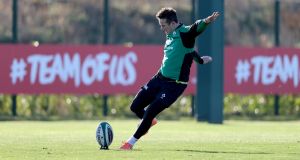 The organisers of the hybrid Autumn Nations Cup may not have quite the intriguing finale to the group stages they would have wanted, nor indeed much in the way of a tournament so far if the truth be told, but they’re probably quite content with the way next weekend’s play-offs are shaping up.

All roads, for example, point to an England-France “final” at Twickenham tomorrow week, with the form guide of the recently completed 2020 Six Nationsfurther underlined by the probability of Ireland hosting Scotland and Wales meeting Italy in the third and fifth place play-offs.

Come Sunday’s 2pm kick-off against Georgia at the Aviva Stadium (live on RTÉ and Channel 4), in all probability Ireland will already have been consigned to finish second in Group A, presuming England beat Wales at Parc Y Scarlets today (kick-off 4pm, Premier Sports).

For Ireland to finish top of Group A they would need a much-changed Wales to deny a strong-looking England even a losing bonus point, while also recording a bonus point win over Georgia, and in the process making up a points difference of 40.

Awaiting Ireland in the third place play-off next Saturday will almost certainly be Scotland, presuming France overtake them at the top of Group B by beating Italy in the Stade de France today (kick-off 8.10pm Irish time, Premier Sports), when Nigel Owens will be in charge of his 100th Test match, becoming the first referee to reach this remarkable landmark.

Although the agreement between the French Rugby Federation and the clubs has compelled Fabien Galthié to make 13 changes to the starting line-up which beat Scotland, the Azzurri also look fairly callow, all the more so without the injured duo of number eight Jake Polledri, who has had to undergo knee surgery, and flanker Sebastian Negri.

There will be a minute’s silence before the game in memory of former French winger Christophe Dominici, and the home players will have his nickname, “Domi”, inscribed on their jerseys.

Although their hand was partially forced by injuries, Andy Farrell and his coaching staff clearly had the forthcoming six-day turnaround in mind when making nine changes for the Georgian game, bringing to 33 the number of players used in the three group games.

Collectively, Ireland will be looking for altogether more solid foundations in their setpiece, with the maul also rediscovering its teeth, sharper recycling at the breakdown, and incisions being made with their attacking game, be it on the ground or in the air.

With next week and the next Six Nations in mind, this game also constitutes an audition for several individuals, most notably perhaps for Ulster out-half Billy Burns, who will be making his Test starting debut after promising cameos off the bench against Wales and England. If he can bring the ball to the gain line and make inroads with his inventive passing, running and kicking game, he could establish himself as Johnny Sexton’s understudy.

Finlay Bealham’s credentials as a prop on both sides of the scrum will be enhanced if he can survive with credit against the Toulon tighthead Beka Gigashvili, and ditto Tadhg Beirne’s abilities as a lock-cum-blindside and Will Connors as a specialist openside if they perform strongly.

With the likelihood of dry conditions, which even the Georgians will welcome after playing games in grubby-looking conditions in London and west Wales, there could be some notable landmarks reached.

If Keith Earls ends a 10-game run without a try, dating back to the win over France in March last year, by scoring his 31st in the Test arena, he will move clear of Tommy Bowe as Ireland’s second most prolific try scorer of all time. Jacob Stockdale joined Geordan Murphy in seventh place on that list with his 18th Test try last week, and he is now one try behind Girvan Dempsey and within three of fifth-placed Shane Horgan.