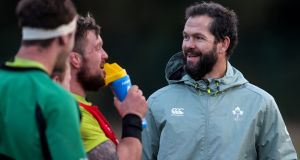 Ireland head coach Andy Farrell: ‘I’m big enough and ugly enough to have been around professional sport most of my life. This is another big game – I’m aware of that – but the stress levels are okay.’ Photograph: Dan Sheridan/Inpho

As the first winter snap hits, the heat appears to be rising on Andy Farrell and his assistant coaches in light of an “average” Six Nations, another loss in Twickenham and a “poor” second-half performance against Georgia, as described by the IRFU high-performance director David Nucifora.

Whether or not the outside noise has been excessive, now as fate would have it Farrell’s first year at the helm will be bookended by home games against Scotland, and Ireland need another win to rubber-stamp their third-place Six Nations finish above the Scots by achieving the same in Saturday’s Autumn Nations Cup play-off at the Aviva Stadium (kick-off 2.15pm).

Furthermore Ireland haven’t lost at home to Scotland since 2010, but if there are heightened stress levels on Farrell he doesn’t show any evidence of it.

“No, not really. I’m big enough and ugly enough to have been around professional sport most of my life. This is another big game – I’m aware of that – but the stress levels are okay.”

Nor has the job been harder than he envisaged.

“I 100 per cent know there’s always going to be massive ups and downs. It’s never a smooth road. The learnings that you take along the way make you stronger in the long run and that’s what I’ll take from it.”

The need for a strong performance to round off Farrell’s first year in charge, and this extended, six-match end-of-year schedule is reflected in what appears to be the coaches’ strongest line-up as they see it.

There could be an 11th Irish debutant of 2020 in the shape of Ulster’s former Templeogue College and Trinity loose-head Eric O’Sullivan, which would also make him the 42nd player used by Ireland in this calendar year and the 34th of this Guinness Series/Autumn Nations Cup.

Four of this year’s 10 debutants to date are sidelined – Max Deegan, Ed Byrne, James Lowe and Billy Burns. Even so, of the others, Hugo Keenan starts again (for the sixth Test running), as does the restored Caelan Doris, while Ronan Kelleher and Jamison Gibson-Park are on the bench.

Yet save for Keenan, Doris, Rob Herring and the restored and fit again Robbie Henshaw, this starting line-up features 11 of the XV which pitched up in an icy Twickenham for the Grand Slam coronation in 2018.

“Pete [Peter O’Mahony], regarding his position, obviously he’s unbelievably good over the ball, he’s so important regarding our set piece and he’s a leader so getting Pete on the pitch is always going to be something in the back of our minds.

“Knowing what your best backrow is and the blend of that and what makes a team feel right is obviously a part of that as well and that’s the backrow that we go with this weekend.”

That said, James Ryan will continue as vice-captain.

“James has done a fantastic job. He’s massively been supported by Pete over the last few weeks. I’ve been speaking to James quite a bit over the last couple of weeks in review, how he’s found it etc, and I think it’s a role he can develop and move forward with.”

Having made five, nine and now six changes in personnel from game to game in this hybrid tournament, Farrell envisages having more continuity for the 2021 Six Nations, as was the case for the 2020 version.

“I suppose when you first take the job everyone is commenting on the same old as far as selection is concerned and then obviously there’s a few things. We wanted to find out about players, that’s been well documented, but also with the injuries that we’ve had there’s a needs must as well that goes into that from time to time. But I see the Six Nations being a more settled one and I suppose that’s the whole point of this period.”

No less than everyone else, this game will colour Farrell’s reflections on 2020, but he maintained: “It’s been a strange old year for everyone, a little bit stop-start, but I think this last period of time has been great for us. Obviously, we’ve made it known from the outset that this is about us finding out about ourselves and each other regarding next steps ahead for next year. So, in the short term of the last six or seven weeks that’s been what that’s been about and I think that’s been great for us to reflect on.”

He is also adamant that they are making progress.

“You guys judge the performance at the weekend and you won’t necessarily see the steps we’re taking on a daily basis behind the scenes. We feel we’re working towards improving all aspects of our game.

“What have we seen so far? I suppose our game understanding has grown, knowing how to deal with the territory/possession game has certainly improved. Our attacking kicking game is one that’s improving, but the accuracy is not there yet and the fundamentals of the game have to be strong.

“It’s one we’ve started, one that we feel behind the scenes is going in the right direction.”