‘I think we’re on the right track. It’s a relatively new squad, a lot of young people’ 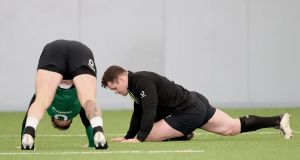 Cian Healy is confident Ireland can produce a big win and performance against Scotland this weekend. Photograph: Inpho

Viewed from the outside, a third/fourth place play-off against Scotland in the Autumn Nations Cup might not be seen as the be-all and end-all. Ho-hum, no fans again and all that.

But it is the end of an intense, six-match, two month campaign under almost continual lockdown which, as Cian Healy notes, will also determine how the Irish squad go into the 2021 Six Nations.

“So I suppose the performance that is expected to come this weekend has to be an all-round culmination of what we’ve done over the last couple of months and being a good standard of rugby and finish some of the stuff we’re putting together because that’s what everyone wants to do.

“Everyone wants to part of that successful team that wins and that plays a great game of rugby. [The changing room] becomes sacred when you put that performance together for each other and you’re sitting in your seat afterwards and you really know you’ve represented yourself and the group unbelievably well. And I think that’s what we’re after this week. We’re really chasing that hard, and the desire is huge.”

It has undoubtedly been an intense time but despite that Healy, who has been part of Irish squads for 11 seasons, revealed: “As for the dressing-room, I would say it’s been the favourite one I’ve been in for mood of players and everyone being on the same page.

“Obviously, there’s different reasons that would heighten or lower different changing-rooms in different years, but I think we’re on the right track. It’s a relatively new squad, a lot of young people, a couple of old boys like me and we have a clear plan. It’s just about getting to that execution of that plan, the final phase.

“For a lot of it, we’ve got through quite the amount of work we’ve done and slipped up on that last bit. I think that gives us confidence. If we’re not getting through that first part, then it gives us a problem. But we’re getting to the point where there’s half a chance, we just need that half chance turning into a full chance and then take it.

“We’re going in the right direction, to be honest,” added Healy, echoing both Jonny Sexton the day before and the belief within the set-up, despite the critical noises outside it, that they are progressing.

While the lack of a clinical edge has, Healy admits, been frustrating they can’t allow this to affect them.

“We can’t get caught up in emotion, we have to get caught up in what we’re trying to achieve and make it happen. Frustration is just going to be wasted energy, so we deal with it and it will annoy people.

In order to cope with the sameness of their time together, to maintain a happy camp and a positive mood, the players have introduced competitions around the hotel, such as table tennis or darts.

“It all just came to a competitive side where you were grouped up with different players to break away from all the front rowers being together and all the second rowers being together so it was good. You’re pushed into different areas of the team where you’ve to work together for something and it’s a bit of craic. There were a few lads on microphones doing some MC work so it’s good.”

When prompted as to the stand-out performers, Healy revealed: “I can’t say much but Finlay Bealham was unbelievable.”

This, evidently, is due to the, less intense, player-empowered culture created by Andy Farrell.

“The management have given us windows where they say ‘this is for you to do what you want, you’ve done your meetings in the morning and your review work, this is solely for the players. If you want to have a movie night or whatever it might be’.”

In all of this having a separate work base from the Carton House team hotel in the IRFU’s HPC has helped hugely.

“It’s a bit different in this camp. I would probably say it’s better and easier to switch off. I suppose you’re still doing your own work at the hotel but we come into the HPC and our training day begins here and you’re here until 5 o’clock or whatever and then you’re back to the hotel. The most we would have is a one-on-one with a coach or a player-led walk-through for lineouts or whatever.

“So it’s nearly like we treat Carton House as home and the HPC as the work venue, similar to how lads would be in clubs except we have the opportunity to pull together when we need or do that extra little bit just to be sure.”

Now is the time to see all this put into fruition.