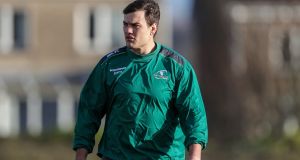 Connacht have made four changes for Friday night’s interpro clash against Ulster at the Sportsground (7.35pm) as they look to get over last weekend’s heartbreaking defeat to Leinster in Dublin.

Andy Friend’s side led 29-12 with just over 10 minutes left at the RDS before Leinster scored three late tries, Andrew Porter’s try after 82 minutes securing victory for the defending champions.

All four changes come in the pack with hooker Shane Delahunt and tighthead Conor Carey coming into the frontrow. Ireland international lock joins Gavin Thornbury in the secondrow and Seán O’Brien is named at blindside flanker.

Stephen Fitzgerald, who joined Connacht on loan move this week, takes his place among the replacements.

Commenting on his team selection, Friend said: “Quinn Roux and Seán O’Brien are fit and ready to go and they come back into the side. They have been two of our top performers this season, so they will give us increased options.

“In the frontrow we also have Shane Delahunt and Conor Carey coming in. These are two other players who have been going really well over the past few weeks. We have some real depth in these positions so it is great for us as coaches to have these options and to bring in fresh legs and know that they are ready to go. Ulster are coming off the back of a great win over Munster and I’m sure they will come to the Sportsground full of confidence.”

Ulster coach Dan McFarland has also made four changes, three of those in the backline as Johnny McPhillips, Angus Kernohan and Darren Cave are all handed starting berths.

McPhillips comes in to partner John Cooney at halfback, with Cave joining Will Addison in the Ulster midfield. Kernohan starts on the left wing opposite Henry Speight, who will be making his final Ulster appearance before returning to Australia. Louis Ludik completes the back three.

Nick Timoney is the final change, as he is drafted in to make up a powerful backrow with Jordi Murphy and Marcell Coetzee. The front five remains unchanged with Rob Herring captaining the side from hooker. Academy prop Eric O’Sullivan and Marty Moore pack down either side of Herring, with Ian Nagle and Kieran Treadwell once again named in the engine room.

Prop Tommy O’Hagan is set to earn his first Ulster cap if called upon from the bench. Adam McBurney, Ross Kane, Clive Ross and Greg Jones are the additional forward options, with David Shanahan, Peter Nelson and Stuart McCloskey providing the backline cover.