Regrets? Connacht will have a few after a particularly galling loss 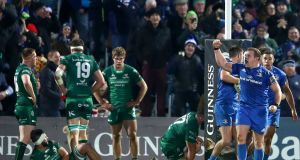 Can a game be wonderful and cruel in equal measure?

Even many Leinster supporters, none of whom lost belief in their team and roared them home to the comeback of the season, felt more than a little sympathy for the manner in which Connacht had a potentially landmark victory snatched from them.

Connacht have been breaking new ground in recent years, with overdue wins in Thomond Park three seasons ago and Belfast this season, and last season’s hat-trick of home interpro wins. But storming the RDS, and the capital city, remains out of reach; and never more tantalisingly so than on Saturday night.

In managing just one win over Leinster in Dublin since 1955, which was all of 16 years ago at Donnybrook, it’s doubtful whether Connacht ever earned themselves a better opportunity than this.

When Connacht played Leinster in the 2016 Grand Final in Edinburgh just before kick-off Pat Lam pulled aside their back three of Niyi Adeolokun, Tiernan O’Halloran and Matt Healy and told them that the occasion, the Murrayfield pitch, and the sunny weather were made for them. Go for it, and they did. The trio were on fire, and scored the province’s three tries in their 20-10 win.

None of them pitched up here. Already missing Adeolokun and Healy through injury, they were further disrupted by the loss of O’Halloran before kick-off.

The ensuing reshuffle saw Darragh Leader shift from fullback to the wing, Kyle Godwin from centre to the left wing and Tom Farrell from inside to outside centre.

It also, admittedly, meant a fired-up Bundee Aki was promoted from the bench to midfield, although in a further change from the named 23, David Horwitz was ruled out, and this meant promotions to the bench for the young Academy duo of Conor Fitzgerald and Kieran Joyce, neither of whom were used.

Not that you’d have guessed it for much of the night, in attack at any rate.

Within five minutes Connacht’s rejigged backline had carved a sweet strike move for Cian Kelleher to complete a classic winger’s finish in the corner; albeit a mite too easily for Leo Cullen and Stuart Lancaster’s liking one ventures.

Aki had shaped to truck it up before pulling the ball back for Jack Carty and Leader gave Kelleher the try-scoring pass. In response to Jamison Gibson-Park laying on a try for the impressive Conor O’Brien, Aki then trucked up a lineout steal by Gavin Thornbury and off the recycle Tom Farrell, a menace all night, freed his hands for Leader to apply a stunning finish.

Even better followed when Carty, having the best season of his career, chipped gathered and scored, and then responded to Mick Kearney muscling over by dummying Dan Leavy and giving the excellent Caolin Blade a snappy run to the line with a sumptuous pass for the bonus point try.

Carty’s only miss off the ‘tee’ was the first, touchline conversion and when his 43-metre penalty extended the lead to 29-12 Connacht looked to have the match in their hands.

Alas, although they upped their intensity for a while in defence, if there was one flaw in Connacht’s performance it is that instead of continuing to hold onto the ball their kicking game invited Leinster to run it back. And if Leinster are invited to run it back, there’s a good chance they’re going to do exactly that.

While two bonus points might have seemed like a good return to some Connacht fans before the game, afterwards it didn’t, and certainly not to Andy Friend.

“We wanted more than that. We scored four tries against a very good Leinster outfit and that was a message inside to the players, ‘for 65 minutes when we played our style of football you showed you were a dominant side and your forced Leinster into errors’.”

“Then we probably shut up shop just a touch, and maybe started to defend a lead there and gave them some opportunities and they’re a good enough side to take those, and they did. So credit to them too.”

Even the man of the match, Carty, admitted: “Maybe our choice of kicks could have been better, to get the ball off the park. That’s something myself and the half-backs have to look at.”

Leinster had enjoyed their spells of continuity until then, with Scott Fardy giving another tour de force (as did Connacht’s leader from the front Jarrad Butler), and ultimately their ability to keep the ball through multiple phases eventually wore Connacht down.

But it needed some oomph off the bench, with Max Deegan and Porter giving their carrying game some ballast and Noel Reid given them width, as Adam Byrne especially caused mayhem with his strength and offloading on Connacht’s stretched left flank. Losing Finlay Bealham to a head knock also hurt Connacht’s scrum.

Necessity being the mother of invention, as much as anything else, Cullen admitted there was “the realisation that there’s no margin for error now. I think there was a little bit of, ‘oh it’s gonna come, it’s gonna come’, but then it was like, ‘oh it has to come now because if it doesn’t the game is up’, and we used every last second.”

“So it’s a combination of factors really. Full credit to the players for being able to dig it out, but as I said, there is a ‘but’ there.”

Porter, having brought Carty’s penalty to make it 29-12 into range when conceding ten metres for dissent, was like a man possessed thereafter. He assuredly had the Monday video review in mind, and his redemptory match-winning plunge for the line will have made it considerably more bearable viewing.

1 Tipping Point: DeChambeau’s transformation raises questions, but who will ask them?
2 Ken Early: Resurgent United can be the top team – in Manchester
3 Coronavirus implications will delay completion of CVC’s €450m Six Nations deal
4 Monica Seles: The warrior queen who could have been the best ever
5 Lewis Hamilton: I was ‘silenced’ over Colin Kaepernick
Real news has value SUBSCRIBE