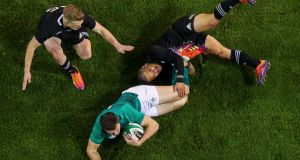 Only one thing really rankled about the historic first win in Soldier Field two years before; it wasn’t Dublin. It wasn’t in front of a raucous full house in Lansdowne Road, where Irish teams and supporters alike had known nothing but pain. The suspicion lurked that winning on home soil would be different, that it would be better.

Johnny Sexton had flagged it from before the November window. Beating the All Blacks at home for the first time was the big prize. That sun-kissed day in Chicago had been special from the moment the Irish squad, with Munster players to the front, formed a human ‘8’ in honour of Axel. For once, an Irish team had drawn some truly meaningful inner emotional energy from the ‘haka’.

This time, they simply formed a green chain and took one step forward before holding their ground. It was more subtle than the admittedly spine-tingling ‘in yer face’ march led by Willie Anderson in 1989. The crowd roared its approval of the ‘step’ before respect was then afforded the haka. It was hugely symbolic. This Irish team would not be taking a step back, and unlike Jimmy Davidson’s 1989 vintage who were beaten 23-6, Joe Schmidt’s class of 2018 had gone toe-to-toe with the almighty All Blacks over three previous meetings, only being denied by the heartbreaking last play in overtime in 2013.

True to their word, Ireland didn’t take a step back either. In Chicago they had outscored the All Blacks by five tries to four, but this time gave the lie to the notion that this was the only way to skin them, and became the first Home Union team to keep the World Champions tryless since 1995 with a superbly focused and well-drilled defensive effort.

This was the day which provided confirmation that Ireland have a world-class pack of forwards. Rarely has an All Black scrum suffered as it did against the immense Tadhg Furlong and co. James Ryan, CJ Stander et al took it to them on the gain line and 9-6 was a scant first-half return. The game pivoted on Kieran Read’s fumble after charging down Jacob Stockdale’s kick before Stockdale seized the day as he usually does after Sexton, orchestrator in chief, instigated the trademark strike play with Bundee Aki.

It still required that diving goalkeeper’s save by Peter O’Mahony and it says everything about Ireland’s performance that it should never have come to a one-score, defiant endgame. But the team and the crowd, for sure all too aware of 2013, were having no All Blacks’ act of escapology this time. And yes, it was even better than Soldier Field.

A sixth semi-final defeat for Munster since their second triumph in 2008 and this 27-22 one against Racing 92 truly hurt. In successive pool campaigns they had won three of four matches with Racing, and could easily have won the fourth. But they were beaten in the first quarter, Teddy Thomas scoring two tries and literally handing another to Maxime Machenaud. Did 10 flights in the trek to South Africa drain their legs? Did the strange calls to leave Rhys Marshall and Simon Zebo out upset their rhythm or focus? The 19-point Zebo-inspired salvo after his introduction only added to the mystifying initial non-show.