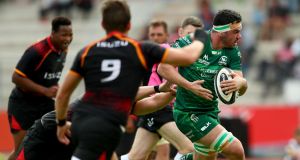 Connacht’s Paul Boyle in action against Southern Kings. “He carries hard, he tackles hard, he knows his role and he knows where he’s meant to be,” says coach Andy Friend. Photograph: James Crombie/Inpho

Paul Boyle has never shirked a challenge or cowed in the face of adversity on a rugby pitch. So, when a contract didn’t materialise at Leinster as he hoped to graduate from the sub academy to the academy, he sought the greener pastures of Galway.

It was a prescient decision as the law student signed his first professional contract with Connacht earlier in the season. The province knew exactly what they were getting because the 21-year-old Gorey native had previously been under the coaching tutelage of backs’ coach Nigel Carolan in his former role as Ireland Under-20 coach.

He knew Boyle’s value as a player. It hasn’t been hard to spot. Mike Ruddock was another to recognise Boyle’s talent and had no hesitation in handing him the number eight jersey for Lansdowne.

The fact that he was a teenager, playing Division 1A rugby as a forward and a primary carrier for the team, not only illustrates his talent but also his physical and mental toughness.

He came through the Leinster Youths system, playing his underage rugby with Gorey RFC while attending Gorey Community School.

Like many Irish children he was versatile in terms of sporting acumen. In a previous interview he explained: “I played it all growing up. Then I gave up the soccer (aged 10 or 11) because that was the one that always clashed with the rugby

“But I always kept the hurling and football going [with Castletown GAA club] until I was about 16, 17. I played a few games of minor when I could. I kept that up the whole way up. The rugby got going, and there was a south-east development squad level at U-15. I just said I was going to concentrate on that and then play hurling and football with the club. But I never went on to play county level.”

He excelled at rugby instead, making the Ireland team for the Under-20 Six Nations (2017), playing in the back row alongside Leinster’s number eight at the RDS tonight, Caelan Doris, and then taking over the captaincy for the Junior World Championship (JWC) in Georgia.

Carolan, who had stepped down as Ireland U-20 coach after the Six Nations, rang Boyle a few days after the player returned home from the JWC tournament and invited him down to Galway, hoping to persuade him to take up a place in the Connacht academy. Boyle signed up and hasn’t looked back.

He played in the British & Irish Cup with the Connacht Eagles, switched club allegiance to Buccaneers and also made his senior debut last season.

Connacht’s Andy Friend was the latest coach to appreciate the young player’s qualities.

“The first performance against Brive in pre-season, it was [a case of], ‘who the hell is this bloke?’

“The message to the whole squad when I came in was, ‘age is not a barrier’. If you’re good enough then we’ll pick you and Boyler is a testament to that. He’s just continued to deliver,” he said – a fact that has been recognised in man-of-the-match accolades and also tries.

But the Australian also captured the essence of Boyle’s game perfectly.

“He’s tough and when you watch his game, he’s just workmanlike in everything he does. He carries hard, he tackles hard, he knows his role and he knows where he’s meant to be.

“He bounces off the ground quickly and works hard off the football. It’s a pretty simple formula but he’s doing it really well.”

Connacht’s back row tonight contains a couple of old-school ‘sevens’ Colby Fainga’a and captain Jarrad Butler and in Boyle a player who is unrelenting on both sides of the ball.

Doris and Boyle were once teammates for the Ireland U-20s so it will be interesting to monitor who has the greater influence over the 80 minutes at the RDS tonight – the Mayo-born Leinster number eight or his Gorey-born, Connacht counterpart.