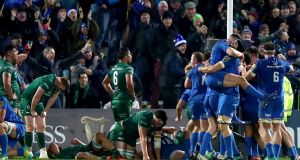 On a perfect December night at a throbbing RDS, this was a stupendous comeback by Leinster, indeed the fightback of true champions, to a truly stupendous game. Assuredly the Pro14 game of the season to date.

That will be of scant consolation to Connacht after seeing a 29-12 lead evaporate in the last drawn out dozen minutes when their reshuffled team finally ran out of steam as Leinster completed a remarkable, unrelenting, 27 phase attack for the 83rd minute match-winning try by Andrew Porter.

The win cements Leinster’s place atop Conference B, while the two bonus points pushed Connacht to within three points of second-placed Munster in Conference A, but how they would have cherished a first win over Leinster in Dublin since 2002, and second since 1955.

From 5/1 underdogs at kick-off they had seemed odds-on favourites entering the final quarter, before being finally over-run. The two teams with the best defensive entering the game produced a nine-try thriller.

When Connacht beat Leinster 20-10 in the 2016 Grand Final in Murrayfield their back three of Niyi Adeolokun, Tiernan O’Halloran and Matt Healy were on fire, and they scored the province’s three tries.

Already missing Adeolokun and Healy through injury, they were further disrupted by the loss of Tiernan O’Halloran before kick-off, with Darragh Leader shifting from fullback to the wing and Kyle Godwin switching to the left wing.

This at least meant Bundee Aki was promoted from the bench to midfield, although in a further change from the named 23, David Horwitz was ruled out, and this meant promotions to the bench for the young academy duo of Conor Fitzgerald and Kieran Joyce.

Not that you’d have guessed it for much of the night, in attack at any rate.

An example was the slick strike move with which they opened the scoring in the fifth minute. Off a line-out maul, Aki shaped to truck it up but instead pulled the ball back behind Tom Farrell for Jack Carty to move it wide and Leader’s pass gave Cian Kelleher a run to the corner outside Hugo Keenan and he raced in by the corner flag for a classic winger’s finish.

But Leinster’s response was swift and clinical, and inspired by some of the young tyros who so impressed during the November window.

First fullback Keenan freed his hands in the tackle to release Caelan Doris, who was then on hand again when Peter Dooley popped the ball off the deck. Although the move ended with Ross Byrne’s skip pass looping over Adam Byrne and the touchline there was an inevitability about their opening try. From a line-out maul, Fardy generated go-forward ball with a big carry before Jamison Gibson-Park dummied, sniped and gave a scoring pass to Conor O’Brien who raced in under the posts.

Leinster came knocking again when O’Brien offloaded for Dave Kearney and again through their multi-phase attack, but a big hit by Gavin Thornbury on Ross Byrne slowed down the home side’s tempo before Paul Boyle won a turnover penalty at the breakdown.

Instead, it was Connacht who stunned the home crowd by striking next. Aki made the first big carry off a line-out before the ball was recycled for Farrell to free his hands and offload for Leader to pierce the blue line with his outside-in line. Faced by two players, he elected to veer back against the grain and around Adam Byrne for another fine try. Carty added a good conversion for a 12-7 lead.

Off an athletic line-out steal at full stretch by Thornbury, Farrell next busted through the tackle of Doris, with Aki at full steam and Godwin taking it on further. They looked set to score when Caolin Blade sniped but his offload went behind Aki when a try looked likely.

Unperturbed and undeterred, Connacht promptly struck for their third try. Doris showed good strength and speed off a Leinster scrum on their 22, but was held up by the Connacht halves and Blade ripped the ball from him.

There was then the rare, rare sight of Jarrad Butler busting the tackle of Rhys Ruddock of all people before Carty spotted space in behind the blue line, chipped hooker Bryan Byrne and gathered on the run to score under the posts.

His conversion made it 19-7, although he then had to turn and quickly beat Doris to the touchdown after the latter charged down his kick before Adam Byrne claimed a Gibson-Park box kick in the air above Godwin and offloaded sharply to O’Loughlin before Blade turned and marked the centre’s chip. Fardy also spilled the ball when threatening the line off Gibson-Park’s pass but Connacht were good value for their 19-7 interval lead.

One can only presume it’s as well there were no microphones in the home dressing room and, unsurprisingly, there was renewed intensity to their carrying and clearing out upon the resumption in another of their multi-phase attacks.

O’Brien was hauled down just short of the line by Kelleher, and after Gibson-Park sniped with an advantage play Mick Kearney swiveled through Ultan Dillane’s tackle to score.

Typical of the night that was in it, Connacht promptly struck back again. First they countered a counter-ruck with one of their own, before Godwin trucked it up off Aki’s inside pass on half-way. There seemed nothing on when Carty turned and shaped to pass behind him only for him to turn past a flummoxed Dan Leavy, speed through and then - akin to Aki’s try-scoring pass to CJ Stander at Twickenha - deliver a sweet right to left long pass inside for the supporting Blade to score their bonus point try under the posts.

Leinster might have been dealt a near fatal blow to their hopes on the night when O’Loughlin was perhaps fortunate to only be penalized when tipping Blade over at a breakdown.

As each side turned to their benches, Connacht started to add some real fury to their defence with some thunderous hits. When Boyle won another turnover penalty at the breakdown, Leinster were pinged another 10 metres for dissent.

It was a costly 10 metres too and it brought it to 43 metres from the Leinster posts, and Carty had turned to run back into his own half before the flags were raised.

Leinster weren’t done yet though, and a scrum penalty earned them an attacking line-out from which they rumbled over for Sean Cronin to touchdown, Ross Byrne’s conversion making it 29-19.

By now Leinster, helped by the introduction of Noel Reid’s long passes, had realised that every time they moved the ball wide right Adam Byrne would cause damage to the reshuffled Connacht defence, and when he again freed his hands in the tackle to release the ever-dangerous O’Loughlin, Fardy carried it on to pass infield for Leavy to finish.

He and the home crowd celebrated like they’d won but there was almost again an inevitability about that outcome after Ross Byrne’s touchline conversion made it a three-point game.

Godwin will long regret opting for a risky long pass to Kelleher which was cut off, so sparking a five-minute, multi-phase attack in which Deegan and O’Loughlin made big inroads before Leinster opted for a sequence of pick and goes close to the line. Connacht, almost out on their feet, could not resist. Eventually Porter, who like Deegan provided real oomph off the bench, rumbled over. The RDS roar must have been heard miles and miles away. Some night. Some game.