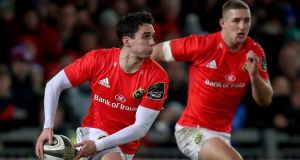 Munster’s Joey Carbery made his first appearance of the season in their Pro14 loss to Leinster. Photo: Bryan Keane/Inpho

Munster head coach Johann van Graan admitted that he has several injury concerns ahead of next Friday night’s Guinness Pro14 clash with Ulster at the Kingspan stadium, arising from a tough, physical encounter against Leinster.

Even the timing of Joey Carbery’s return to Munster colours for the first time this season following an ankle injury was brought forward slightly because of a hamstring issue with the player he replaced at outhalf, JJ Hanrahan.

Carbery, summoned on 56-minutes to a thunderous ovation from the capacity 26,400 crowd showed one or two flashes of his ability. Van Graan said: “He (Carbery) got on a bit earlier than we wanted. JJ was struggling with a stiff hammy, but I thought he did well.

“Obviously it was his first game back in a long time. I thought he read play pretty well, a few good kicks into the corner and one almost line-break, but it will take some time. To get him out onto the pitch and through 25 minutes of play, from that perspective was a real positive from our side.

“The guys who have had two weeks off will be back on Monday. Obviously, a few played against Connacht (Chris Farrell, Jean Kleyn and CJ Stander), so they will only be back against Racing. Unfortunately it looks like we will have more guys out than we will have back.”

The list includes prop Dave Kilcoyne, hooker Kevin O’Byrne, flanker Chris Cloete and Hanrahan. Van Graan continued: “Guys have bangs and bruises and we have a few games coming up. A lot of guys have had a lot of minutes, we also have to manage them, a tricky situation but that is rugby.”

His Leinster counterpart Leo Cullen has no such injury concerns ahead of Saturday’s Pro14 game against Connacht at the RDS, expressing a satisfaction at the resilience shown by a youngish team to hold onto the victory. “To get a win down here is fantastic. A lot of young guys out there, they dig in at the end, that’s the most pleasing piece.

“Wave after wave, it’s pick and go, close quarter stuff, but at least we were getting bodies in the way to stop the ball-carrier with latches and all the other bits.”

He pointed out that the wind had a huge bearing on the nature of the contest especially when it came to the difficulty of moving the ball wide.

“Some of that is the wind as well in terms of the accuracy of some of the passing is not quite on the money, which just slows the play.

“That’s what I mean about it almost being like there are more defenders than there are attackers out there because of the speed of ball but some of the transfers are quite slow as well, so it is hard to get decent, crisp passes in where you are hitting attackers out in front and you are on the front foot.

“The ruck was a bit of a slog. Munster had three sevens in the backrow when you think (Chris) Cloete, Tommy O’Donnell, Jack O’Donoghue has played there as well; they’re aggressive into that space.

“They had lots of probably borderline calls where you have to look back and say ‘is there a release there or what?’ That’s obviously up to the officials and what they are refereeing. But yeah, the conditions probably played the biggest part I think (in impacting the nature of the contest), to be fair.”