All Black Jordie Barrett ejected from MCG for ‘behaviour’ issue 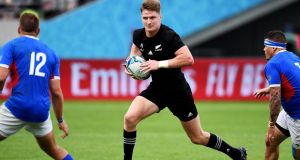 All Blacks back Jordie Barrett was reportedly ejected from the MCG for sculling a beer. Photograph: Andrew Cornaga/Inpho

New Zealand’s struggles at the Boxing Day Test have extended to the terraces at the Melbourne Cricket Ground, with All Blacks star Jordie Barrett ejected from the ground for a “behaviour” issue, according to New Zealand media reports.

Barrett, among thousands of travelling fans at the MCG for the Black Caps’ first Boxing Day Test at the ground in 32 years, was led out by security staff with another spectator on day three on Saturday, New Zealand’s Stuff.co.nz website said.

A Victoria police spokeswoman said two New Zealand nationals, a 22-year-old and 23-year-old, were evicted and had incurred a 24-hour ban from the venue.

New Zealand fans, saying they were witnesses, said on social media that the All Blacks star had been ejected after sculling a beer.

“The security at the MCG was over the top for the two days we were there. People were getting kicked out for nothing,” one wrote on a Facebook page for New Zealand cricket fans.

Jordie Barrett had a scrape with the law last year when he entered an unlocked residence in Dunedin in the early hours of the morning and ate McDonalds there following a team function with his Super Rugby side Wellington Hurricanes.

Police were called but they declined to charge the All Black, who said he had walked into the “wrong flat” when looking to attend a party at a neighbouring address.

New Zealand, trail 2-0 in the three-match series, after they fell to a heavy 247 run defeat at the MCG.

Joanne O’Riordan: One squeamish word could revolutionise the women’s game 19:00
McDowell sets his sights on Ryder Cup place 18:50
Áine O’Gorman comes out of retirement to answer Ireland’s call 18:07
McNamara makes four changes to Ireland U20 side for England clash 17:44
Rory McIlroy rules out taking part in Premier Golf League 18:17
Here is your handy guide to sport on television this week