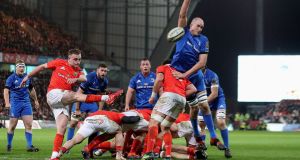 Leinster’s triumph was largely down to prosaic qualities, principally their bloody-minded defiance in defence, rather than their traditional attacking qualities. It was fraught at times particularly the end game when Munster pummelled away but the blue line stood firm and Leo Cullen’s side just about deserved their victory.

It represents Munster’s first defeat in 22 matches at Thomond Park in all competitions, the last side to do so, Leinster almost two years ago to the day. The home side scrapped for their lives but when dominating territory and possession in the second half they lacked the cold-eyed ruthlessness and clear-eyed vision when they had their opponents stretched to breaking point.

Leinster played the better rugby and perhaps the result can be condensed into the fact that the visitors took points from virtually every visit to the Munster 22, while the home side spent up to three minutes at a time on a couple of occasions with the roles reversed but came away empty handed.

The game was pockmarked by errors, some induced by the ferocious tackling by both sides but also by a lack of precision and poise. Referee Frank Murphy decided to take a laissez-faire approach to the breakdown, consistent for both sides, but it did slow down the delivery and deny the teams room to breathe in an attacking sense.

Cullen will be happy with the commitment and maturity shown by his young team. The pack worked like Trojans, Andrew Porter made 20 tackles, the outstanding Will Connors, 23, without missing one while Caelan Doris offered a man-of-the-match performance for his work on both sides of the ball. Scott Fardy led the team brilliantly and by deed as well as word, while Ross Byrne’s cool game management was impressive.

Munster too had some standout players, their backrow, especially Jack O’Donoghue were excellent, while the front five with Billy Holland in the van and Fineen Wycherley showcasing his burgeoning talent caught the eye as did Mike Haley at fullback.

Leinster lost Jamison Gibson-Park to illness prior to the match with 22-year-old Trinity scrumhalf Rowan Osborne promoted to the starting team and Hugh O’Sullivan joining the replacements.

In the early moments both teams ran hard and straight in possession, a feeling out process that largely yielded nothing with the exception of one Shane Daly surge down the touchline. Leinster outhalf Ross Byrne decided to put some shape on the game and it was from the second beautifully weighted diagonal that provided the game’s opening score on nine minutes.

Leinster got their first attacking platform, a lineout just outside the Munster 22 a slick backline move opened up the home side’s midfield axis and sent James Lowe racing for the line. Even though he was hauled down short, the visitors battered away around the fringes before Ed Byrne was driven over. Ross Byrne added the conversion.

The game stuttered along primarily because neither side could secure enough quick ball at the breakdown to rattle through the phases, so instead it was a staccato affair, devoid of rhythm. Rucks were festooned with bodies, none of whom were in any rush to release in the tackle or roll away for that matter.

As a result the box-kick was a primary gambit favoured by the respective scrumhalves; it made for some turgid exchanges with the ball travelling too far or not far enough. The prominence of the respective backrows illustrated the nature of the exchanges to some degree.

The visitors offered one or two glimpses of their potency behind the scrum, once surging to the wider channel from a turnover but Ross Byrne’s pass to Adam Byrne was adjudged forward and the chance petered out. The Leinster outhalf did, however, manage to nudge the scoreboard in the right direction as far as his team were concerned, tagging on a couple of penalties to make it 13-0 with half-time beckoning.

However Munster were given access to the Leinster 22, a passage of play that was bookended by two scrum penalties and when the visitors transgressed for a third time, JJ Hanrahan kicked the 21-metre penalty to narrow the deficit to 10-points.

It was a timely fillip seconds before the interval taking the bare look off a frustrating opening 40-minutes for the home side, albeit that they would have the benefit of the strong wind on the resumption. They will also reflect on the fact that they had the better of the exchanges in the set piece, particularly the scrum.

Munster handed the initiative from the re-start when Conor O’Brien spilled the ball but following a thunderous carry from Dave Kilcoyne, Doris won a vital turnover. It proved a brief respite for the visitors, who conceded a penalty at a ruck after Munster spent 90-seconds in a softening up process.

Hanrahan landed the penalty to make it 13-6 to Leinster but it was exactly the start to the half that Munster would have spoken about in the dressing room. Leinster then responded with their most patient and cohesive passage of play that lasted close to two minutes. They were initially direct in carrying round the fringes but then switched to midfield and finally the wide channels.

Munster weren’t committing numbers to rucks initially, instead fanning out, filling the line and getting off the line quickly but when Leinster eventually did manage to tie in greater numbers they go to the edges. A knock-on after good work by Fardy cost them a good try scoring opportunity while Ross Byrne lacked support following an excellent line break.

The visitors continued to play the more adventurous rugby but handling mistakes stifled momentum and some of the running lines were too lateral. Every error was punished by conceding significant tracts of land, particularly through Rory Scannell’s left foot.

Joey Carbery arrived to perhaps the loudest ovation of the night on 56-minutes, his diagonal wiper kick several minutes later forcing Leinster back to within six metres of their line. It came from yet another Leinster handling error.

Munster largely opted for the blunt force trauma of direct carrying and it started to sap Leinster legs, the visitors’ realignment in defence becoming marginally slower and allowing the home side to break the gain-line more easily. The home side eventually squeezed out another penalty on 73 minutes, tapped it into the corner and launched another full frontal assault.

Leinster to their credit remained defiant and unbreakable, a double tackle by Sean Cronin and the outstanding Connors, a highlight in the goal-line resilience, ended the siege eventually when Fardy won a penalty at the breakdown. There could have been one last plot twist when Doris was penalised for not releasing. Again Munster went to the corner but replacement Ross Molony managed to nick possession at the resulting lineout. From there they ran down the clock to copper-fasten a fine victory.