The sporting decade that was: Ireland finally slay Goliath

After 111 years of waiting, history is written on a crisp Chicago afternoon 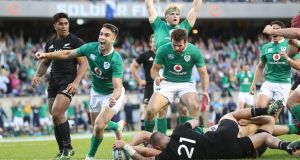 This can never happen again. Not at the same time. The most cherished memory from this decade for millions of sports fans criss-crossed an unforgettable week in Chicago.

Let’s start with the Uber ride, at breakneck speed, from O’Hare International and finish after ‘The Bus’ crash.

The radio is blaring. It’s bottom of the fifth. “The Kerryman on the corner of Clark and Erie” we tell our baseball obsessed driver as his team lead 3-1 in the World Series.

It was already late Wednesday night. Overtime means many finish up partying outside Wrigley Field before a dawn raid on Steve Hansen’s press conference to hear a glowing tribute to Anthony Foley.

Interminable Adidas and AIG events eventually lead us to the 17th floor of Trump Towers - where the IRFU elected to camp mere days before the United States of Ridiculousness came into reality - to hear Joe say it ain’t so.

Friday passes in this wonderful haze as five million Chicagoans take to the streets to serenade their team as double-decker buses inch over the blue dyed river.

Green becomes the primary colour on Saturday morning on a weirdly sun-kissed stroll down Michigan Avenue.

The game still seems unreal. Time is ticking away so Beauden Barrett has the All Blacks attacking with mesmerising skills, at breakneck speed, until Andrew Trimble hits Liam Squire so hard the ball is dislodged.

Ireland scrum inside their own half, wide on the right with 73 minutes on the clock and New Zealand trailing 33-29.

“Olé, Olé, Olé” booms around the NFL Bowl as Conor Murray - his career performance is about to have its signature moment - feeds Joey Carbery. The 21-year-old on debut finds Jared Payne who throws a spectacular pass to Simon Zebo (in January 2018 the Munster fullback signs for Racing 92 on what’s believed to be a two year, €1.4 million contract).

Zebo chips and EVERYONE chases Julian Savea into the dead ball area. Facing a sea of green jerseys, ‘The Bus’ scuttles for safety but Murray miraculously arrives to drive him over the touchline.

It’s not over. Four point game, five minutes to play and the ghosts of 2013 are looming, but a delirious week witnessing the Cubs end a 108-year drought, coupling Irish rugby’s 111-year wait, crescendos on this last scrum. Jamie Heaslip picks and floats the ball into the air as Robbie Henshaw arrives to burst three tackles for a spectacular score.

Hours later the Soldier Field silence is only punctuated by rhythmic typing of reporters relaying truths they know to be self evident.