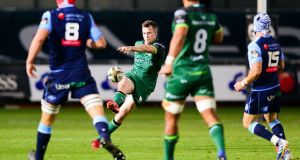 Connacht will be without their outhalf Jack Carty when he joins the Irish squad for the remainder of the Six Nations. Photograph: Inpho

The two players were selected in Andy Farrell’s Ireland squad for upcoming rescheduled Six Nations Championship matches against Italy and France. Friend explained: “Just a couple of HIAs, Finlay early on probably, five or six minutes (in), Dave about 12 minutes into the game. They will just have to go through the HIA protocols

“I thought that Jack Aungier did really well, it is 75 minutes of football.” He also explained why another Ireland squad member, Jack Carty was replaced on 58 minutes. “We know we are about to lose him (to Ireland) so it was an opportunity for (Conor) Fitzgerald.”

Three tries in the final quarter of the match put a gloss on the final score-line for the Cardiff Blues, their victory merited if not the margin against a tiring Connacht side. It was a disjointed display from the visitors, pockmarked by errors, indiscriminate kicking and weak defence yet for all those shortcomings they did create opportunities but could not avail of them.

The pack toiled hard to a man with replacement Augier, Eoghan Masterson, Conor Oliver, Quinn Roux and Jarrad Butler, getting through a huge volume of work, but some of the carrying was a little telegraphed and easy to defend against, particularly when Connacht were able to double team the carrier.

Kieran Marmion and Carty probed the fringes, Alex Wootton turned scraps into something more palatable while Sammy Arnold and John Porch stood out because of their footwork in contact. Cardiff started brightly, Jarrod Evans kicked a penalty on six minutes but it wasn’t until 35 minutes that they managed to reward their dominance with a try from Hallam Amos.

Connacht reduced the deficit to 10-7 on 56 minutes with a try from Oliver after good work from Arnold but it was Cardiff who responded more positively at a time when they were a player down - tighthead prop Dillon Lewis was in the sin bin - when centre Ray Lee-Lo picked his way past a couple of brittle attempted tackles to send Amos in for his second try.

Another missed tackle allowed Josh Adams to take play into the Connacht 22, and in trying to stop a three-on-one, Connacht wing Peter Sullivan knocked the ball down; the upshot a yellow card and a penalty try. Replacement hooker Kristian Dacey crossed for the bonus point try on 73 minutes converted by Jason Tovey.

Jackie Tyrrell: every corner-back is an island now 06:00
Mayo’s Stephen Coen: ‘Favourites, underdogs – really, it’s irrelevant’ 06:00
Could Jacob Stockdale be the second playmaker Ireland needs right now? 01:00
Andy Farrell staying calm amid pressure to end first year in charge on a high 01:00
Not good enough that IRFU kicks for touch on schools rugby 01:00
Here is your handy guide to sport on television this week