The Offload: Inspired John Cooney bounces back from the lows 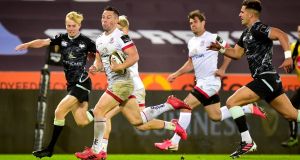 Sitting in Auschwitz, Viktor Frankl never imagined that someday his musings would inspire our Offloader of the Week. But there you go.

“Everything can be taken from a man but one thing: the last of the human freedoms - to choose one’s attitude in any given set of circumstances, to choose one’s own way,” so tweets John Cooney, clearly a disciple of the Austrian psychiatrist and holocaust survivor.

The quote tweet is linked to Cooney’s impression of Conor McGregor’s cocky walk alongside news of his match winning try and conversion for Ulster in Swansea. Days after being dropped by Ireland head coach Andy Farrell.

The form scrumhalf on the island last season, a gang of media and supporters - some of whom count as both - were calling for Cooney to supplant Conor Murray in the national team. Covid interrupted that narrative before a glaring dip in performance saw him warming Dan McFarland’s bench for the Pro14 final defeat to Leinster.

“The thing that causes you the most amount of grief and suffering is also the biggest outlet for your relief and happiness,” Cooney tweeted Sunday morning.

Deep stuff. We presume the 30 year-old has devoured ‘Man’s Search For Meaning’ - Frankl’s seminal work - and while you bag inspiration wherever it is going, three scrumhalves - Murray, Kieran Marmion and Jamison Gibson Park - made Farrell’s squad based on reputation, form and merit. The coming force that is Craig Casey was also called up.

Cooney, clearly, will continue his search for meaning but this column’s favourite Frankl quote has to be: “The attempt to develop a sense of humour and to see things in a humorous light is some kind of a trick learned while mastering the art of living.”

“This week made me reflect on how bizarre and paradoxical sport is. The thing that causes you the most amount of grief and suffering is also the biggest outlet for your relief and happiness. I don’t think there are many things in the world that provides such ups and downs.” - John Cooney on being dropped by Ireland coach Andy Farrell before posting 14 points in Ulster’s 24-12 win at Ospreys.

29,500: the number of tickets sold for Sky Stadium (capacity 37,000) in Wellington for All Blacks v Wallabies.

All Blacks crowd refuses to return in numbers

Some things will never change. Like, New Zealanders refusal to stump up to see their beloved All Blacks in the flesh. Only 29,500 tickets - ranging from €45 to €127 - were sold for Sky Stadium in Wellington (capacity 37,000) despite Australia providing the first international opposition inside the country for 400 days.

The ‘Cake Tin’ stadium boss Shane Harmon blamed travel restrictions, particularly from Auckland, for the shortfall in numbers that on television looked significantly less than 29,500.

For all the warnings of an “existential” threat to rugby coming from chief executives in Europe if fans cannot return to stadiums, the best country at handling the pandemic cannot tempt their people to shell out for the ultimate rugby product.

Despite the All Black brand coming under real threat now South Africa are moving north, the NZRU refuse to make room for a Pacific Island franchise on their elite club scene.

“If you look at the facts, [the Pacific nations] have been shafted by New Zealand Rugby every time,” said Aayden Clarke, chief executive of the Pacific Rugby Players (PRP) union. “If not now when?” Clarke asked, echoing a Black Lives Matter slogan.

Perhaps this is down to the fact that 50 per cent of the current All Blacks squad and 40 per cent of Super Rugby talent are Pasifika players.

If the fans refuse to save southern hemisphere rugby from financial collapse that leaves the unions reliant on rugby’s true overlords - CVC Capital Partners and their version of a global calendar.

The rules of rugby have changed, significantly, if you are a woman playing for an English club. The “mitigation strategy” will see a 75 per cent reduction in scrums because amateur players with separate careers cannot be tested on the same weekly basis as professional male squads.

Also, testing is leading to “self isolating as a result of fake positives” which cannot be done by most amateur players. The proposed solution is to test less. That means less scrums by allowing a “play advantage” from knock ons, free kicks for a forward pass and removal of the scrum option off penalties.

This could lead to the extinction of the heavyset prop or it could speed up the game and improve the spectacle to such an extent that Joe Schmidt takes interest from his new perch as World Rugby’s Director of Rugby (overseeing the entire planet).

There are other laws to reduce “face to face” contact that effectively depowers the maul (only one stop allowed, players not in the original lineout can’t join the drive and it can only take place in the 22).

There is also “strict social distancing while the ball is out of play” - yes, this sounds ridiculous - so it will be interesting to see how Ireland’s six players playing for Sale, Harlequins and Wasps cope with normal rules in a green jersey. Maybe the international game will follow suit. Maybe this is the future of the game.