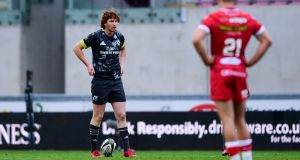 Munster’s Ben Healy prepares for the final kick of the game in the Pro 14 game against Scarlets at Parc y Scarlets. Photograph: Ryan Hiscott/Inpho

Ben Healy’s superb second-half cameo at Parc y Scarlets last weekend that kick-started Munster’s stirring comeback and victory on the opening weekend of the Guinness Pro 14 has rightly been lauded for the physical prowess and moxie he demonstrated in helping to eke out a win that seemed unlikely with 15 minutes remaining.

It was his fourth appearance in a senior Munster jersey and in some regards highlighted his development from his debut almost a year previously in a Pro14 game against Edinburgh. He took a wallop to his face in the pre-match warm-up and endured a pretty tough baptism, albeit collecting 11 points with the boot.

He made a Champions Cup debut off the bench earlier this year against the Ospreys before getting his second start against the Scarlets last weekend. Healy was a member of the 2019 Ireland under-20 Grand Slam-winning squad, initially as an understudy to Harry Byrne – the Tipperary native made his debut against Italy – before starting the final two games when the Leinster pivot was ruled out through injury.

It was a role in which Healy continued at the Junior World Championship that summer, when Byrne didn’t travel. Jake Flannery switched into outhalf from fullback from time to time during several games that season, notably the final quarter of the Grand Slam decider against Wales, offering a different style.

A crucial part of Healy’s rugby maturation has been playing with Garryowen in the Energia League Division One that has facilitated his development. Healy may be viewed in some quarters as the shiny new thing but he needs and should be given room to breathe as a player. The 21-year-old is not the second anybody and shouldn’t be smothered by that expectation.

He faces enough rigorous competition from the young cadre of outhalves in Munster. Leaving aside JJ Hanrahan and the injured Joey Carbery for a moment in Flannery (21) and Jack Crowley (20) Munster have two very talented players, who despite being able to play in other positions, will have designs on the 10 jersey.

A ‘happy headache’ for Munster coach Johann van Graan will be trying to find enough game time to satisfy everyone’s requirements. Healy took the opportunity presented to him last weekend with aplomb and that is all that can be asked of a player; until the next match. His challenge is to maintain, in performance terms, that upward spiral.

In examining the depth chart across the four provincial rosters for outhalves, who are 23 years of age or under, it is instructive to note that all 11 included in the table below, played for the Ireland under-20 team in recent seasons, a remarkable strike-rate, at a time when that particular age grade has enjoyed some notable success, dating back to the 2016 squad that reached the World Junior Championship final.

Ireland coach Andy Farrell will announce a squad for the rescheduled Six Nations Championship games against Italy and France this month initially – there are likely to be some alterations for the Autumn Nations Cup matches in November and the first week in December – and that will define what resources Van Graan, Leo Cullen, Dan McFarland and Andy Friend have at their disposal as the Pro 14 continues during that timeframe.

Versatility can be a cherished attribute for young players looking to get game time and from the 11 listed several have already demonstrated that capacity. Leinster’s Ciarán Frawley has been polished and effective when playing inside centre while David Hawkshaw wore the 12 jersey and captained the Irish 20s initially during the Grand Slam campaign prior to suffering a serious injury, from which he is now happily recovered, in a training accident prior to the French match.

Flannery and Crowley have both played fullback and centre, Michael Lowry at fullback before being restored to arguably his best position, outhalf, while Angus Curtis, currently injured, has predominantly operated as a centre. Harry Byrne travelled to Portugal with the Ireland senior squad earlier this year underlining the esteem in which he is held.

Healy, Bill Johnston, still only 23, Conor Fitzgerald and Conor Dean are primarily outhalves. The flip side of being versatile is that a player ends up doing a whistle-stop tour of several positions. Jeremy Staunton and Paddy Wallace were brilliant young outhalves who ended up being ‘re-homed’ because Ronan O’Gara and David Humphreys took possession of the 10 jerseys for Munster, Ulster and Ireland respectively.

There’s no doubt that 11 into 10 doesn’t go in this context but what will hopefully be interesting is watching a number of these outhalves given a platform to express their talent over the next couple of months without being saddled with additional expectation, other than trying to manage the game or games in question. That’ll be enough with which to be getting on for the moment.