The Offload: Reincarnation of ‘Rog’ in a Tipp fella’s skin 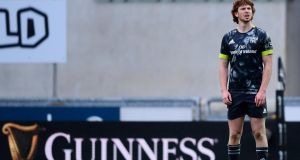 Munster’s Ben Healy was the hero on Saturday in Wales. Photograph: Inpho

After watching events unfold at the RDS on Friday we envisaged Andy Farrell’s Ireland squad for Paris containing 20 blue names alongside CJ Stander, Bundee Aki and the eternal Keith Earls.

Sunday morning amendments to this theory included the reincarnation of ‘Rog’ in a Tipp fella’s skin. Neither extreme is likely, but you know the season is going well if whispers of internal strife down Limerick way are drowned out by local lads flooding the Munster XV behind Ben Healy.

Warren Gatland will be tuning into Bundee Aki now that Manu Tuilagi has snapped his Achilles tendon. You know the season is going well if Aki versus Damian De Allende reappears at a packed Soccer City in Johannesburg next year.

If Tadhg Furlong demolishes Mako Vunipola and the England scrum at Twickenham you may float down to your local pharmacy for a Covid jab (read the label).

You know Connacht’s season is going well if the words ‘Abraham Papali’i’ echo around student gatherings near the Spanish Arch. You know Ulster are in a groove if Michael Lowry is repeatedly branded the Irish version of Damian McKenzie. Or Iain Henderson somehow manages to keep Ryan Baird out of the Ireland team. Or Dan McFarland replaces media briefings with tutorials in Sports Psychology. Or Ulster announce Blackrock College as their official feeder school.

We will know Leinster have reached another level if Caelan Doris joins Sexton, Ringrose, Ronán Kelleher, Furlong, James Ryan and Dan Leavy in a Lions squad with Stuart Lancaster and Andy Farrell on the coaching ticket.

You know the system has evolved if Leo Cullen signs Craig Casey to a five year deal with Scott Penny moving in the opposite direction as part of a blockbuster trade.

The worm has definitely turned if Joe Schmidt launches a podcast entitled: Knowing me, knowing you.

CJ Stander gave Ben Healy an exit strategy. The captain - after Peter O’Mahony was sent off for being bold - looked at the Tipperary native, who casually nodded towards the goal posts, 51 metres out with the clock in red.

Stander gave Healy another glance and Healy gave the South African another nod. The ball cleared the dead ball line. This happened a few seconds after the 21 year-old coped with savage pressure to convert Kevin O’Byrne’s try. That made it 27-all.

Healy guided the Ireland under-20s to a Grand Slam in 2019 and Glenstal Abbey to a Munster schools cup in 2018.

Ever since Joey Carbery’s ‘no end in sight’ injury prognosis, Johann van Graan has been holding out for a hero, all the while name checking his three academy outhalves. Yet Van Graan keeps selecting JJ Hanrahan.

‘Offloader of the week’ - a new segment with no tangible reward besides global recognition - had plenty of candidates. Aki and Rhys Ruddock should feel hard done by, while Baird keeps bursting into our consciousness, and Tommy O’Brien deserves an honourable mention but the wiry outhalf from Nenagh Ormond RFC, after snatching victory in Llanelli to paper over many, many cracks in the Munster performance, is the unanimous winner.

Tune into Munster TV next week, folks, as Johann confirms that Thomas Ahern is a centimetre taller than RG Snyman.

“I was worried she was going to lose the baby. You could tell she was in pain. She was inconsolable, she was crying. There was this wail, you can’t describe it. As a father, I can’t think of anything that was more traumatic in my life. If anyone who is a father or mother and hears their child let out that wail, it was deep and came out from right down inside, it was utter fear and traumatised like nothing I’ve ever heard. I will never, ever forget.”

Mitch Hooke, Australian businessman and ex-father-in-law to Sam Burgess, quoted by The Australian. Burgess - who has stood down as South Sydney assistant coach and analyst for Fox Sports - denies allegations of drug use and domestic violence.

When taking the financial temperature of the professional game in Ireland and abroad last week we also spoke to schools and clubs to see how pandemic life was treating them.

Live streaming on Youtube has brought old eyes back to AIL matches but the clubs have “no fundraising capacity” - says one source - which will put most out of business “by Easter.”

“Pubs are closed because they are unsafe yet you have guys scrumming on top of each other, I don’t know how it is allowed” said another before Garryowen v Cork Con, Dungannon v City of Derry, Terenure v St. Mary’s, Skerries v Blackrock, Banbridge v Rainey, Malone v Queen’s and the women’s fixture between Queen University and City of Derry were all cancelled due to the virus.

“This will only get worse,” admitted another club administrator.

Most concerning of all is the unsafe safety measures forced upon schools. 15 player pods mean eight versus seven in scrums (despite being kept in 30-plus class rooms for the entire day). The ‘no shower rule’ cannot last into winter months if the IRFU and schools want to avoid legal action from parents after their teenager arrives home with hypothermia.

Senior schools rugby is under-19 but - despite their professional attention to detail - they have been forced to down tools during Level 3, whereas under-20s club competitions, with far less oversight, are going ahead.