One step forward for Ulster, but uphill climb lies ahead 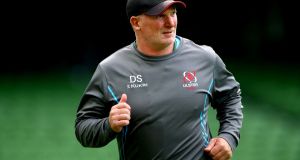 Ulster skills coach Dan Soper: ‘We thought it was important to draw a line in the sand and actually have a change.’ Photograph: James Crombie/Inpho

Ulster’s annual early season refrain, albeit this year in October, has been that this time it will be different. A stream of young players lining out in the backline last week against Treviso in the first weekend and yes, a win is a win. But this week against Ospreys in Swansea is qualitatively a different challenge.

“We are under no illusions. We had a good start in game one. But it counts for nothing if we don’t back it up in game two,” noted Kiwi Dan Soper.

Soper has flown under the radar at this end of the island but has come to be an influential voice in the Ulster set up, especially among the younger players. He joined the province in 2018 from his role as Director of Rugby in RBAI, after the school won three Ulster Senior Cups in succession.

Among those singing the praises of the Ulster skills coach, who has been in Ireland now for more than 20 years, are Luke Marshall and John Cooney.

To colour the flow of the week, Ireland coach Andy Farrell will announce his first squad on Wednesday or Thursday, and that may also have an influence on what kind of mood Ulster will be in as they travel to the Liberty Stadium.

Farrell will rightly measure his selection on Ulster’s games against Leinster in the Pro 14 final and Toulouse in the Heineken Cup prior to the “new” season, not Treviso.

“Probably the best thing for us is it felt like another step forward in our performance from where we’ve been at the end of last season or the last few weeks,” said Soper of the 35-24 win over the Italian side. But he knows a different team will line out in Wales.

Stewart Moore, in his first senior game alongside James Hume as Ulster’s centre partnership, with Michael Lowry at outhalf rather than his more familiar full-back, was an interesting glimpse to the future. Hume, especially, has shown front and an ability to influence matches, although it is maybe premature for Farrell to take notice in what is a highly competitive midfield area.

“Three fellas that come though the age groups system, to them playing together for Ulster in a senior fixture was really exciting. I thought they did really well. There’s a lot of potential there to work on,” said Soper. “He [Hume] is doing very well and, don’t get me wrong, but he’d be the first to admit he’s still learning, he’s still developing. I want to see him playing for Ireland, but let’s take one step at a time.”

Ospreys won in Scotland last week against Edinburgh in a sodden Murrayfield, their first away win for a year. Ulster also lost to them in Swansea earlier this year. But Soper is keen to encourage a separation of the two seasons, especially to put distance between the 36-8 loss to Toulouse in the Heineken Cup quarter-final and to Leinster.

“We got a lot of freshness in our selection the way the guys panned out. A change of mindset and a few other things into the start of a new campaign.”

There was no injury update to the squad on Monday, as the players were still being assessed by the medical staff following the weekend match.