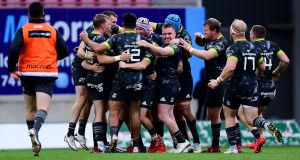 Johann van Graan first heard of Munster’s legendary fighting spirit growing up in South Africa and he saw it in action in Llanelli as his side overturned a 14-point deficit to beat the Scarlets.

Munster looked dead and buried at 24-10 down in the second half. They had also lost their captain Peter O’Mahony who was sent off for receiving two yellow cards.

With 10 minutes remaining, hope of a Munster comeback was bordering on the impossible, but they found a way to win as they scored 13 points with a man short.

A late try from replacement hooker Kevin O’Byrne was followed by a last-gasp Ben Healy penalty from halfway which saw Munster snatch victory from the jaws of defeat.

Healy’s late kick was the first time Munster had been ahead in the game.

“With Munster nothing is impossible,” said an understandably delighted Van Graan.

“That’s what our club is built on. I knew all about Munster’s tradition and never-say-die attitude when I was back home in South Africa and we saw that out there.

“It’s about community, respect, values, and never giving up. Whether we are playing home or away we always try and find a way.

“I never thought the result was beyond us even when we were so far behind. Munster always stand up and fight and that’s what we did.

“We never panicked when Peter got sent off. Obviously if you lose your captain for the last 10 minutes of the game you could lose your head, but the coaching staff and the players kept their cool. We took it play by play and ground out the win.”

Tries from Jack O’Donoghue, Chris Farrell and O’Byrne were enough to seal the win for Munster and the bottle showed by the visitors was promising after their semi-final defeat last term. This win came against a strong Scarlets side.

In front of the watching British & Irish Lions head coach Warren Gatland, O’Mahony did himself no favours as he was sent off for accumulating two yellow cards. Both came for needlessly charging into rucks.

All of the Scarlets’ points came via the boot of Wales full-back Leigh Halfpenny who looked like he would kick Munster into submission.

His nine penalty goals was a Scarlets record in one game and equalled the Pro14 best of Luciano Orquera for Aironi against Benetton in December 2011.

Halfpenny booted his team into a comfortable lead while O’Mahony saw yellow for the first time.

Halfpenny’s fourth penalty and a miss from Hanrahan left Munster 12-7 down at the break. The visitors were second best, especially up front, and Halfpenny continued to be pinpoint from the tee.

O’Mahony was pictured using the shoulder at a ruck after Farrell had scored and he was promptly sent off although the try and Healy’s conversion stood.

Surely Munster were dead and buried despite the seven points? Not so.

Halfpenny and Healy swapped kicks before O’Byrne and a Healy conversion tied the game.

But there was still time for late drama. From 50 metres, Healy stepped up to win it.

“He made one or two errors, but Ben is somebody that wants the ball and he certainly wanted that ball in the last minute,” said Van Graan, when asked about Healy’s match-winning kick.

“That’s what you dream of as a young 10 – kicking the winning penalty in a game like this. He’s got a long boot on him not only out of hand, but from the kicking tee as well. A lot of time in this competition it comes down to small margins and from last year’s competition we ended level on points with Edinburgh so this might be a big result in the wider context of the Pro14.”

Replacements: K O’Byrne for Marshall (45 mins), F Wycherley for Kleyn, J Loughman for Cronin, B Healy for Hanrahan (all 52), R Scannell for Sweetnam, S Archer for Ryan, G Coombes for O’Donoghue (all 62), N Cronin for Casey (73).