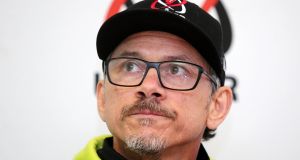 Ulster director of rugby Les Kiss will be hoping his team can continue their winning form this weekend. Photograph: Jonathan Porter/Inpho

Ulster director of rugby Les Kiss has made five personnel changes for Saturday’s Pro12 match against Zebre at Kingspan Stadium.

Luke Marshall and Jacob Stockdale, both replacements in last Friday’s win over Treviso, will form an all-new midfield partnership. Meanwhile, Al O’Connor, Robbie Diack and Chris Henry are included as new faces in the forward pack.

Stuart Olding, who impressed against Treviso after switching to outhalf late on, will start in the 10 jersey outside Ruan Pienaar. Jared Payne has overcome a niggle and will line out at fullback, with Craig Gilroy and Charles Piutau set to join him in the back three.

The match will be Stockdale’s first start at outside centre, while Marshall will shift to inside centre after playing most of his rugby this season in the 13 jersey.

The front row is unchanged as props Callum Black and Wiehahn Herbst, earning his 50th cap, will start either side of captain Rob Herring. Kieran Treadwell will partner O’Connor in the engine room, while Marcell Coetzee will pack down at number eight alongside Diack and Henry in the back row.

Rodney Ah You has recovered from injury and is named among the replacements with fellow forwards John Andrew, Andy Warwick, Franco van der Merwe and Clive Ross, who could also make his 50th Ulster appearance.

Meanwhile it’s been confirmed that Ulster will host the Barbarians in a special fixture at Kingspan Stadium on Thursday 1st June (7.30 kick off) and tickets are now on sale to season ticket holders.

The fixture - which will follow on from the England versus Barbarians game at Twickenham on Sunday 28th May- gives Ulster fans a last chance to see departing players such as Roger Wilson and Ruan Pienaar in action.

The Barbarians first travelled to Ireland in 1957, when they played an Ulster Invitational XV in Belfast. They also played at Kingspan Stadium in November last year, when they defeated Fiji 40-7 in a highly entertaining clash.

Welcoming the announcement of the fixture, Kiss says that the fixture will exceed last year’s Fiji match:

“We are delighted to be hosting such a high profile game at Kingspan Stadium. Not only will it give local rugby supporters a chance to see some world class rugby, but it will also be an opportunity for them to say goodbye to some of the players who have contributed so much to the Ulster cause.

“The Barbarians versus Fiji game last November was a special occasion but I have no doubt that this event will exceed it, given our direct involvement in the match. We look forward to welcoming the Barbarians for what is sure to be a competitive and hugely enjoyable fixture to finish the season off.”