Vunipola brothers on the bench for England clash with Scotland

Meanwhile, Hamish Watson has been recalled to the Dark Blues’ starting line-up

Gerry Thornley and Gavin Cummiskey preview 'a huge' Calcutta Cup match between England and Scotland in the Six Nations, as England chase a Grand Slam and Scotland aim for a Triple Crown 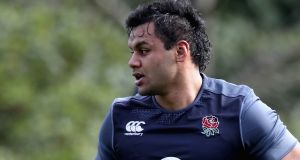 Eddie Jones has resisted the temptation to put Billy Vunipola straight back into England’s starting XV against Scotland on Saturday, instead naming the No8 among the replacements after selecting a side that features three changes for the Calcutta Cup match.

Vunipola has played just 72 minutes for Saracens since suffering a knee injury in November and despite returning to the England camp this week, Jones has opted against naming him in the starting XV. Ben Youngs is however recalled at scrum-half in place of Danny Care while Jonathan Joseph comes back in for Ben Te’o at outside-centre and Jack Nowell gets the nod on the right wing ahead of Jonny May.

The indications were that Jones might pick Vunipola in place of Nathan Hughes after pictures emerged of Jones’s intended XV on a whiteboard during a training session at England’s Bagshot base on Tuesday. Hughes keeps his place however, to make his fifth England start.

Jones has lamented the absence of Vunipola’s ball-carrying since he was sidelined in November and had hoped to have him available to face Ireland a week on Saturday. But he was deemed fit enough to start for Saracens last Sunday and will provide England, who are attempting to win a record-equalling 18th consecutive match, with a considerable boost from the bench.

His brother Mako joins him on the bench with Joe Marler winning his 50th cap at loosehead prop. Anthony Watson is also set to make his first appearance of the Championship having also been named among the replacements.

Dan Cole, the only member of the squad to start all 17 of England’s consecutive wins, is again named at tighthead with the captain, Dylan Hartley, at hooker. Joe Launchbury and Courtney Lawes are the locks with Maro Itoje and James Haskell continuing as the flankers. George Ford and Owen Farrell again form their 10-12 partnership while Elliot Daly stays on the wing and Mike Brown remains at full-back.

The Edinburgh back-rower started both the Scots’ first two games against Ireland and France but was named on the bench against Wales last time out after losing his place to John Hardie.

But with his Myreside club-mate ruled out for the remainder of the tournament after sustaining a knee injury against the Dragons, Watson has won a reprieve in time to take on Eddie Jones’ record-chasing Red Rose outfit on Saturday.