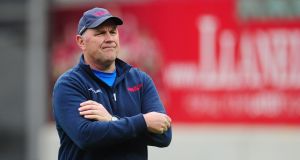 Wayne Pivac is a rare gem; a quotable Kiwi. Fed starving rugby reporters at the recent “Guinness” Pro12 awards, he did. The Aucklander successfully coached Fiji once upon a time before the lure of family and home guided him to North Harbour.

Didn’t work out as All Black legends Craig Dowd and Jeff Wilson filled the breach (they didn’t last much longer with Wilson doing his best Tom McGurk impression on New Zealand TV nowadays).

The Auckland gig came back around in 2011 after Ulster hired Mark Anscombe. Of course coaching jobs never last with Anscombe, aka Cowboy, eventually released by the biennial Ulster pressure valve.

Anyway, in 2014 Pivac was recruited as Simon Easterby’s assistant in Llanelli. When the IRFU offered Easterby the forwards role under Joe Schmidt, Pivac found himself in charge of the Scarlets.

Trick to surviving any merry-go-round is a vice grip. Pivac understands as much. This is season three for the former beat copper.

And here they come, rolling into Dublin without their Welsh lock (Jake Ball) or Lions hooker (Ken Owens) trying to snatch the life out of Leinster’s unbeaten record at the RDS that dates back to January 2015.

So, really, we are telling this story just in the nick of time. It probably concludes tonight. Same goes for the Ospreys journey down Limerick way. That’s not just the Irish view; that’s presumably what the Pro12 desires. Because nothing sells in this part of the rugby world like a Leinster versus Munster duel at the big house of a Saturday evening.

Afterwards, when the injury toll is totted up, everyone can wash their hands of this northern hemisphere guff and set alarm clocks as All Black mania unfolds deep into July.

This should play out as told as no travelling side has won a playoff in this league.

“I’d like to certainly think it can’t last forever,” said Pivac. “It’s an amazing stat, isn’t it? I’ve only been here three years but it stacks up, obviously home advantage is huge and it’s something we’re going to have to overcome. It’s a massive challenge but look, anything’s possible. We’re in some good form at the moment.”

Central to that good form is Leinster castaway Tadhg Beirne. Now, some context is needed to explain how the former Clongowes lock/flanker ended up earning a wage in Wales. During his academy days Beirne was injured more often than he wasn’t.

“I had a pretty stressful time in Leinster,” said Beirne this week. “My first year in the academy went really well and things were looking really good. Then I picked up that adductor injury and it took me a long time to recover from it. In that period, a lot of people passed me out.

“From that perspective, it was frustrating. With the environment in Leinster, you learn a lot and become a better person and a better player. I have no regrets in staying there but, in hindsight, I could have left earlier. But I wasn’t getting game time so I didn’t really have much footage to leave earlier.”

‘Asset for any team’

Leo Cullen has a heart though and enabled Beirne to build up enough minutes during the 2015 World Cup so a CV, with the requisite clips, could be shopped around.

Beirne’s quality has duly shone through in 22 appearances this season.

“Is he big enough for a secondrow at international level?” asks Pivac. “That may be a question mark but certainly at the level he’s operating at now he’s doing a very, very good job and the fact he can play in more than one position, I think he’s an asset for any team.”

What else are the Scarlets offering? Plenty in the backs with Johnny McNicholl an impressive piece of snatch and grab recruitment before the New Zealand system got full value from the Canterbury fullback.

There are also some Lions. Liam Williams is currently leading the charge of aerially dynamic wingers seeking a Test start next month.